“Get there if you can and see the land you once were proud to own…” W. H. Auden’s Poems (1930) presents a catalogue of exhausted landscapes and fragile psyches. This line in particular repeats in my head as I board the train at Richmond station en route to Gomshall, from which it is a short walk to E. M. Forster’s Piney Copse—a place I have been imagining for years, ever since reading his essay My Wood.

Forster reflects on the effect of owning property on his character. At the same time, he considers nature conservation and public rights of way. While the woods might be a peaceful place for those who wander in, for Forster owning land leads not to security but to restlessness, the same urge that drives the artist to create. 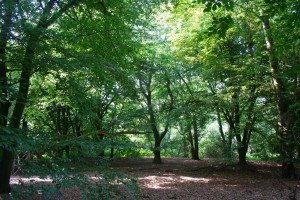 Piney Copse is quite small and not that piney, with only a few conifers. Still, it stands out as a shock of green among the surrounding fields, and the interior provides a shady retreat. A public footpath crosses within, and Forster reflects on the tension between private property and public access: while erecting walls would give him exclusive access to the wild blackberries, he concludes that to keep others out would lead only to a “pseudo-creative” selfishness.

This same question of property and public access motivated Charles Rothschild as he founded the Society for the Promotion of Nature Reserves in 1912. The SPNR took a self-described “modern” approach, embracing the emerging science of ecology, a new “point of view” on the living world articulated by Arthur George Tansley, to protect entire ecosystems rather than specific species.

While the society began with economic arguments for the “value” of placing nature in “trust” for future generations, it was not until activists moved towards a rhetoric of recovery and regeneration for a suffering nation that the case for nature protection resonated with a larger public in the interwar years and during postwar reconstruction. Making this shift intelligible, as I argue in my book Exhausted Ecologies: Modernism and Environmental Recovery, required not only work from activists, but also the aesthetic innovations of artists and writers like Forster, James Joyce, Virginia Woolf, Djuna Barnes, Jean Rhys, Chinua Achebe, and many others, to critique the psychosomatic effects of modernization.

Suffering from the sleeping sickness encephalitis lethargica, Charles Rothschild took his own life in 1923. His land, Woodwalton Fen, became one of the first nature reserves in the United Kingdom. After a few train transfers, a bus ride, and a short walk, I enter the fen on a cool and rainy summer day. Despite the fatigue of travel, I feel a surge of energy. The rain lets up and the lush green comes alive with flowers, birds, insects, and even a few cows. 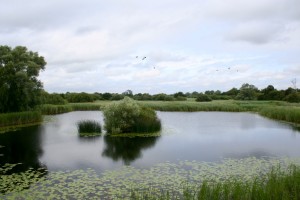 While it is tempting to feel transported back to the marshes of England’s pre-industrial past, a microcosm of the setting D. H. Lawrence transforms in his novel The Rainbow, the fen’s existence alongside agricultural land, industrial quarries, and wind farms speaks to the complicated amalgamation of humans and nature that defines life in the Anthropocene. Modernist writers explored this entanglement avant la lettre through a rejection of idealized nature in favor of immersive, psychological, and material engagements with environment.

After working on a project for many years, it can be hard to see the forest for the trees. Archival research at The National Archives, The Museum of English Rural Life, The Wildlife Trusts, and many libraries brought the book to life. At the same time, watching the wind move through the reeds, it is obvious that the land itself is a text too: one that tells a story of people struggling to articulate the importance of environmental care to bring relief, recovery, and renewal to a modern world obsessed with speed, profit, and consumption. 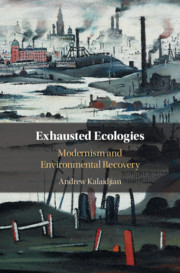 About the Author: Andrew Kalaidjian