Any history of twentieth century literature in English is unimaginable without Yeats and Joyce, both born in Dublin in the last years of the nineteenth century. They are international figures who came from a place which spawned successive waves of writers and playwrights. If the historian or theorist of political cultures thinks of turn-of-the-last century Ireland, they are inevitably drawn to these figures as agents of effective historical and cultural change – and makers of great art. But if the literary historian ventures back before the births of Joyce and Yeats at the end of the period of the Victorian United Kingdom, what do they find in the age of Eliot and Tennyson, Dickinson and Whitman? Unless they go looking fairly hard they usually don’t find very much.

For the scholar and student of the United Kingdom of Great Britain and Ireland, the ‘and Ireland’ bit is an often-forgotten component in Victorian ‘English Literature’ or the literature of Victoria’s ‘British’ Empire. Scotland and Wales are no less overlooked when the contemporary critic or political journalist, no matter how sophisticated, refers to England as Britain or vice versa. Anglophone Victorian literary criticism is censorious of an accepted ideology of Victorianism as progress, building the critique on the historicist trivium of gender and race and class. Its beef, as it were, is with England: liberal economics, Imperialism, patriarchy. Ireland or Scotland look like an afterthought, but perhaps they always will be: witness on the one hand the fanciful ideas of fastening together the current United Kingdom with a bridge across the Irish Sea, and on the other the ‘will of the people’ of Northern Ireland or Scotland to remain federated with a bigger entity than the UK.

Then again, much Irish writing seems to have been built on a complaint about the constitutional connections that many felt were forced on them for many years with the ‘mainland’, the island to their East. Irish literary historians frequently omit the Dickens or Shakespeare with which many writers were raised, no matter how that example can be seen in the plays of Yeats or the pages of Ulysses. The Irish story as told by the Irish seems to look inward at the developing nationalism of its majority and the besieged unionism of a significant minority. When either side thinks of their culture they think of change, loss and painful transitions: the decline of Irish as the majority language along with the loss of half the population to Famine and mass emigration; the insecurities of a landed class losing control as an unhappy populace vented its growing desire for land.

Victorian Ireland sometimes looks like silence and exile, and not a lot of cunning. To redress this picture, Irish Literature in Transition, 1830-1880 is the first collection of its kind to consider the entirety of the literature of what Irish historians still have difficulty calling ‘Victorian Ireland’. It reveals that a wealth of writing in Ireland, the UK, the United States, and even India, originated in this famine- and emigration-stricken and always disputatious place. The reader of nineteenth-century Irish literature will encounter the later novels of Maria Edgeworth, the poetry of Jane Elgee and James Clarence Mangan, the hit plays of Dion Boucicault, the ‘Irish novels’ of Trollope and Thackeray, the roots of a generation of Irish American Catholic novelists or the Lahore street boy, Kipling’s ‘Kim o’ the Rishti’. That reader will also get fresh views on gothic fiction and the woman writer, a popular press sold in an age of growing literacy, and the struggle to represent the immensities of famine and political violence. They will get to know Tories and Whigs, orange and green, the Irish as well as the English language, myth, realism and the inevitable ballads. 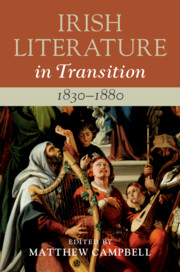 About the Author: Matthew Campbell

Matthew Campbell is Professor of Modern Literature at the University of York. He is the author of Rhythm and Will in Victorian Poetry (1999) and Irish Poetry Under the Union (2013). He is also the editor of the Cambridge Companion to Contemporary Irish Poetry (2003) and The Voice of the People; the European Folk Revival (2012)....