We need new thinking and new politics if the world is to get out of the mess we are currently in. A new book Global Green Politics provides a tour de force of the contribution of Green politics to building a fairer and more sustainable future.

Environmental issues are now firmly on the global political agenda. Major UN summits and even meetings of the G8 most powerful economies in the world often feature environmental issues, especially climate change. We have now had nearly 50 years of international environmental diplomacy, such that unsurprisingly ‘the environment’ is part of the everyday practice and teaching of global politics. Awareness of the scale and urgency of our planetary predicament was heightened by the publication of the IPCC special report on 1.5 degrees in October 2018 which warned of the need for ‘transformative systemic change’ and, as if to underscore the severity of the warnings, was followed by a series of droughts, floods and severe weather events around the world. This was the trigger for new mobilisations such as the Extinction Rebellion and the declaration of a state of climate emergency by many cities and councils around the world.

This growing awareness of environmental issues has not yet led to a serious engagement with more radical Green politics. Green politics are remarkably absent from discussions and debates in global politics and from academic enquiry about them. The neglect is often mutual. In practical terms, foreign policy is also often down-played or given scant attention in Green party manifestos where emphasis tends to be placed on economic localism and the decentralisation of political power as a reaction against global power structures. Despite the potential contributions of Green thinking to an understanding and explanation of the underlying causes and potential solutions to the multiple crises engulfing global politics around war, poverty and social inequality or climate change, Green perspectives on global politics issues have rarely been articulated or brought together and have yet to gain traction. In a modest way, this book seeks to remedy that.

From security and economy, to development and the environment and the role of the state and global governance, Global Green Politics provides the first attempt to bring together and articulate Green critiques, alternative visions and strategies for achieving them across these key issues facing the world today. Combining engagement with a wide range of academic literatures with insights from real world practice and extensive personal experience, the book articulates and advances concrete ideas for change that are taking shape in the world today.

The time is ripe for Green politics and alternative visions of global politics organised around principles of equity, ecology, peace and democracy. Our collective survival depends on it, even if policy and business elites use all the power at their disposal to deny that this is the case. As the prominent Green thinker E.F. Schumacher said, ‘Perhaps we cannot raise the winds. But each of us can put up the sail, so that when the wind comes we can catch it’. In some small way, this book hopes to raise awareness of Green perspectives on world politics that have been so sorely missing from policy and academic debate. 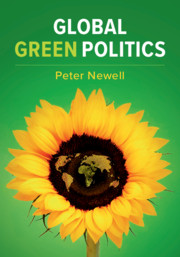 About the Author: Peter Newell

Peter Newell is a professor of International Relations at the University of Sussex. He has worked on the political economy of the environment for over twenty-five years as a researcher, teacher and activist. As well as holding academic posts at the universities of Sussex, Oxford, Warwick and East Anglia in the UK and FLACSO Argentina, he is a board...