Crowd Behaviour in Financial Markets, from the Hong Kong Protests to Algorithmic Trading

In late 2019, Hong Kong erupted with unrest sparked by a deeply unpopular bill to allow the extradition of its citizens to mainland China. Since protests began in March, thousands of people have been arrested and hospitalised, the police department faces widespread accusations of brutality, and government approval ratings have fallen to their lowest since the territory’s handover in 1997.

Hong Kong’s economy snapped into a recession in the third quarter of 2019, and the Financial Times reported in mid-December that investors have transferred billions of dollars in capital into safer harbours such as Singapore as a result. With GDP dipping by 3.2 percent and a prolonged downturn on the horizon, the protests powerfully demonstrate how both social tensions and investor sentiment can turn on a dime, with devastating consequences. In recent years, the rise of trading algorithms—popularly seen as smart yet neutral investors—has been touted as a way to dampen the worst of these shocks. Who better than machines, after all, to make impartial, informed decisions in markets seething with the fury of the crowd?

The question of how to encourage rational thinking amidst roiling crowds goes all the way back to the late nineteenth century at least, as urbanisation and industrialisation drew large crowds into cities and nascent financial markets emerged. Social scientists of the day asked, under the discipline of ‘crowd psychology’, why so many law-abiding, sensible people in cities would drop ordinary norms as they got swept away in a mob’s avalanching emotions. Drawing on popular theories at the time, crowd psychologists argued that just as doctors practised hypnotic suggestion in clinics, crowd leaders found ways to hypnotise attendees in a large crowd, spurring them to do all sorts things they would normally never do.

Hypnosis and hypnotic suggestion fell out of popularity among crowd scholars in the twentieth century—they found the classical crowd theorists’ idea of a self-propelling force in crowds far too simplistic. By then, however, crowd theory had found its way into leading financial strategies of the day. Contrarian investment theory, in particular, has enjoyed considerable popularity, with modern-day luminaries such as Warren Buffett among its heirs. Contrarian investors proclaim that investors—whom they see as a crowd mesmerised by markets instead of making sound, independent decisions—invest irrationally as a rule. The rational solution? Observe the crowd’s irrationality in the market, then trade against it.

On its face, the rise of trading algorithms in the twenty-first century seems to have rendered even contrarianism a thing of the past. Fully automated computer algorithms have largely displaced human traders today, being capable of sending thousands of buy and sell orders in fractions of a second. Unlike humans, who are vulnerable to the market’s maelstrom—not to mention psychological quirks such as making riskier bets when facing losses—financial algorithms are the homo oeconomicus par excellence. Algorithms feel no emotion, care not for politics, and execute their programmed instructions obediently. As long as their strategies are rationally designed, investors assume, financial algorithms slice through the noise of social avalanches when crowds rise up in passion.

Yet, it seems that algorithms too get carried away in market avalanches and herd behaviour. In so-called ‘flash crashes’, automated algorithms interact with one another’s split-second decisions in unexpected ways, leading to shocking market upheavals. Though each algorithm is programmed to behave rationally, their collective interaction often produces dramatic price movements, such as when U.S. markets erased trillions of dollars in value in 2010, all in just over 36 minutes of frenzied machinic trading.

It would be a mistake to think that crowd behaviour occurs only in the streets, or that financial markets simply reflect its impact like ripples in a pond. All large collectives hold the potential for crowd behaviour—among machinic algorithms as much as humans—and understanding the dynamics of social avalanches offers a way to grasp the market’s sudden, perplexing behaviour when crowds rise up in concert. 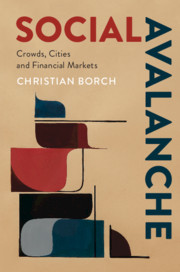 About the Author: Christian Borch

Christian Borch is professor of economic sociology and social theory at the Copenhagen Business School in Denmark. Much of his research focuses on the connections between crowd behaviour and financial markets. He is the principal investigator of the ERC-funded research project ‘Algorithmic Finance’. His books include The Politics of Crowds: An ...