Critical Thinking: Why We Need It Now More than Ever

Fake news. Alternative Facts. Deep Fakes (videos and audios the make it appear that someone is saying something that person never said). An Army of Bots. Misinformation. Disinformation. Post truth.

This is a short list of terms that entered our vocabulary in recent years. They all refer to attempts to mislead the audience and to get them to believe or do something. Of course, there is nothing new about the use of lies, half-truths, and innuendos to get the job done. What is new is the explosion of information available on the internet, which is where most people now get their information. Traditional newspapers are suffering with declining subscriptions and along with their decline there are fewer journalists who have pledged to adhere to ethical standards for news reporting.  Any idiot can post anything and, with some internet savvy and a group of like-minded individuals, get it copied in social media thousands of times and on to legitimate-looking web pages.

In addition to deliberate attempts to mislead, there are the very human problems of believing what we want to be true, preferring anecdotes from individuals over conclusions from conducted with large numbers of participants, failing to understand even basic principles of likelihood and uncertainty, and plain old laziness—not caring enough about a topic to actually check if the facts are true or to seek alternative evidence for a beloved conclusion. In Critical Thinking in Psychology (2nd ed.), a host of outstanding researchers provide ways to enhance the critical thinking skills that are needed in everyday life, the workplace, the exercise of citizenship, and just about anything else you can think of.

What do we mean by “critical thinking?” Researchers generally agree that critical thinking involves rational, purposeful, and goal-directed thinking. Although there is some disagreement about the boundaries for critical thinking, definitions usually include scientific reasoning, evaluating claims, recognizing attempts at persuasion and generating options. It is different from intelligence which can be seen in the list of distinguished Nobel Prize winners with some very wacky ideas in other areas.

There is a growing anti-science movement that threatens health and progress throughout the world. For example, in the United States, almost 10% of adolescents are not immunized against measles. A large portion of these failures to vaccinate are caused by vaccine- deniers who have set up various information sites to warn about the link between vaccines and autism despite the fact that there is an overwhelming body of evidence with 1.2 million children that does not support this belief. Scams that promise people large sums of money in exchange for a few hundred dollars have driven some of the most vulnerable people into bankruptcy. There is no way to determine how many people are swayed by hate-mongering websites or by believing information provided by people or groups who not credible. We should be very scared. 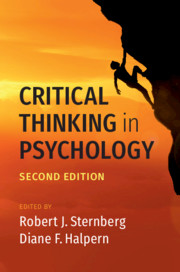 About the Author: Diane F. Halpern