Present-day political controversies are strikingly like those in Britain at the end of World War Two. I’ve constructed The Cambridge Introduction to British Fiction, 1900-1950 to call attention to that convergence. Pivotal in this regard is the Introduction’s final chapter, “Collective Welfare and Warfare: British Fiction, 1936-1950.”

For years now the U.S. has debated the pros and cons of social welfare, especially concerning a national health insurance program.  A similar debate has played out in the U.K., most recently during the Brexit crisis, about Britain’s National Health Service (NHS). The NHS was one of the fruits of the Labour party’s post-war creation of the British Welfare State in 1945. The Welfare State enshrined a national commitment to the collective good of all citizens. The planning that set the terms for that commitment is introduced in my “Collective Welfare and Warfare.” The chapter also introduces the opposition, in the name of unfettered capitalism, to the Welfare State’s socialist inspirations. I discuss the leading economists of the period, John Maynard Keynes, a friend of the Welfare State, and F. A. Hayek, who described it as “the road to serfdom.” Keynes and Hayek’s antagonistic perspectives still shape our conflict-laden economic order, including our contentions about health care. They make the debates of 2019-2020 a replay of the past.

I hope that students will find my presentation of Keynes, Hayek, and the Welfare State a concise way to start thinking about the continuities between history then and history now. Of course, my Cambridge Introduction is a work of literary history, and its principal interest is narrative fiction, not history proper.  Nevertheless, the fiction of 1936-1950 constitutes a rich body of reflections about the history that unfolds alongside it. Just what constitutes collectivity, and what are its possibilities and impossibilities in the shadow of global war, is a compelling topic in the period’s novels and stories. They treat that topic, as readers of the Introduction will see, in a variety of storytelling modes: from realism, or satire, or comedy, to science fiction, fantasy, and romance. Each mode raises questions and proposes answers about the urgent historical questions that have endured. As “Collective Welfare and Warfare” aims to show, novelists’ visions of our shared life remain as relevant now as they were then.

The novelists of 1936-1950 include such well-known names as Elizabeth Bowen, Aldous Huxley, C. S. Lewis, and George Orwell. The chapter I am focused on discusses not only them, however, but other novelists who equally merit the regard of readers. And indeed, behind the Introduction’s last chapter (and in five chapters in front of it), lie celebrated novelists—such as H. G. Wells, Virginia Woolf, James Joyce, and D. H. Lawrence—and an array of others who deserve attention. The post-war Welfare State planning document declared that “Now, when the war is abolishing landmarks of every kind, is…[a] revolutionary moment in the world’s history.” The plan meant to consolidate that moment. However, the ethos of the plan was prepared long before 1945: early twentieth century British novelists, I argue, helped to lay the foundations of the collective’s revolutionary new deal.

From at least 1900 on, fiction allied itself with revolutionary experiments in social order, thought, and art. Those experiments went by (and still go by) the name of modernism. Modernism is an umbrella term for many strands of experience and thought, but overall it names an historical turning point, and a literary historical one. Historically, the turning point was exemplified by rebellions:  feminism’s rebellion against traditions governing sex and gender; labor’s, against the unfettered rule of capital; subject colonial peoples,’ against imperialism. In the history of narrative fiction, the turning point was writers’ aim to re-think the nature of their art. Modernist novelists wanted to newly promote fiction’s relation to historical matters, and at the same time to empower fiction to address history with unparalleled imaginative independence.  I think my readers will find that the Introduction’s earlier chapters about modernist novelists and modernist thought, no less than the chapter about 1936-1950, speak to current concerns. The modernist past is where we come from, and British fiction 1900-1950 is a mirror in which we can still see ourselves. 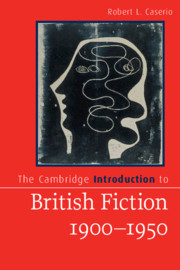 The Cambridge Introduction to British Fiction, 1900–1950 by Robert L. Caserio

About the Author: Robert L. Caserio

Robert L. Caserio is Professor of English, Comparative Literature, and Women's, Gender, and Sexuality Studies at The Pennsylvania State University. He is the editor, with Clement Hawes, of The Cambridge History of the English Novel (Cambridge, 2012), and the editor of The Cambridge Companion to the Twentieth-Century English Novel (Cambridge, 2009)....