Associating with Dickinson: What the Manuscripts Can Tell Us About the Poet’s Conversation with her Culture

I hate movies about Emily Dickinson, and novels. I hate even the idea of the play. I hate impudent rapey poems addressed to Dickinson by entitled male poets. I hate the mugs, pot holders, T-shirts, and hats (I assume there are hats . . .).  Dickinson wished for the sort of fame that would make not her, but her words and thoughts, endemic to the fabric of the language and transformative of our culture. If current popular culture denies the complexity of her thought, that is in part due to her cunning disguise of it as practical wisdom born of hard won private experience expressed in sampler verse. Despite their often hard-headed, acerbic tones, they seem to truck in personal confidence—Dickinson as advice columnist.

That is certainly how I met her as a teenager. Skip to grad school: coming at Dickinson from an interest in Language Poetry, I’d read Susan Howe’s excitable essay in Sulfur about Dickinson’s manuscript variants and the possibility of their wild refusals to conform to the dictates of print, property, and patriarchy. This grown-up version of a personal poet, a feminist, anti-capitalist Dickinson, was it true? Did Dickinson’s material choices, the very slashes of her pen meeting the accidents of her paper, mean something culturally and philosophically? Or did her manuscript variants, as Sharon Cameron argued in Choosing Not Choosing, indicate a consciously undertaken, though consciously unrealizable, project to embody Being in language?

After numerous false starts and dead ends, it occurred to me that I’d better look at the question of the manuscripts’ possible meanings from Dickinson’s point of view. What had she been taught about the act of writing? And what had been her experience of writing, formally and informally (especially) both as composer and recipient, during her formative years? Emily Dickinson: Poetics in Context discovers Dickinson’s practices in manuscript to be indicative of a poetics formed out of a caldron of clashing philosophical positions at mid-century, positions expressed in the related realms of rhetoric, psychology, evolutionary biology, and popular practices related to memory.

It turns out that Dickinson and her peers were steeped in what we might now call ‘theory,’ but which was then called Mental and Moral Philosophy, Philosophy of Rhetoric, and the History and Philosophy of Empirical Science. Each of these emphasized different aspects of the discovery and articulation of truth, but all had in common the thinker’s reliance upon experience, which was composed of associated impressions in the imagination. The skepticism of Hume, the dogmatic Scottish Common Sense reaction to that, and the resurgence of Hume in Brown’s associationist psychology was carried to Dickinson in her textbooks. They more than implied that experience was inextricably bound up with language; indeed the tropes were constitutive. Moreover, the Humean rhetorician Campbell argued that, in order to be received at all, linguistic expression had to touch the recipient’s emotions; only an appeal to the passions could trigger the identification of a faint idea with the intensity of experience. Here were a poet’s marching orders. If the variants expressed this struggle to articulate experience, they were also rhetorical, oriented to the situation of contact with a recipient or to a particular occasion. After all, Dickinson did choose among her variants when sending her poems in letters to friends. But how was she to present her poems to future, unseen readers?

Mid-century psychology and evolutionary biology updated Humean associationism with minute study of the nerves and brain. The study of electricity and its relation to the ‘nervous impulse’ excited those interested in appealing to the passions of an audience. What if rhetorical power were literal? The associationist psychologist (and quondam rhetorician) Alexander Bain offers the sort of synthesis of ideas in philosophy, rhetoric, evolutionary biology, and the study of electricity quite available to Dickinson as a thinker in her own right. Dickinson’s poetics of ambiguity relies upon the creative and inferential power of the recipient rather than arrogating power to the poet.

Dickinson, like many contemporary Victorian thinkers, has a special interest in emotion as a sort of test case for what can and cannot be expressed by language. It seems that certain features of our embodiment, such as the automaticity of emotional expression and our necessary orientation to an environment, are the conditions under which language must operate. Her exploration of conceptual metaphors as the lenses through which we parse reality owes much to Whewell’s histories of empirical science and to the dawning recognition of paradigm shifts as a culture’s embrace of new analogies and metaphors for experience. Dickinson’s creation of perceptual illusions in the poems, and her embrace of the proverb as the model of empirical axioms, implies a poetics of pragmatism.

Dickinson’s practice of drafting upon scraps of paper, some of which already contain culturally or personally meaningful material, may be read as a practical memory system—that of ‘places’ for ideas—and as a paradigm shift from thinking in terms of emblems (a culturally sanctioned set of religious associations) to thinking in terms of private memories and associations with charged objects. Dickinson, deeply attuned to the memorializing culture of Victorian America, seizes the flotsam and jetsam of everyday life for contemplation, and sometimes, as in the case particularly of addressed envelopes (and their associations with the persons addressed) for actual composing. Emily Dickinson: Poetics in Context, presents the materiality of Dickinson’s practice as a sort of archaeological record of her conversation with, and acute participation in, her culture. 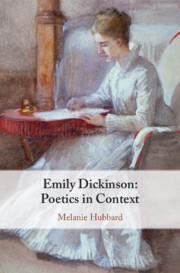 About the Author: Melanie Hubbard