Approaching Nine Years of the Syrian War- Why Has International Law Been So Futile? from the editor of: The Syrian War: Between Justice and Political Reality (CUP, 2020)

The beginning of a new year did not stop the bloodshed in war torn Syria.  On January 1st, a rocket attack was launched by the Syrian government forces on a school-full of students and teachers- in Idlib, the country’s last opposition stronghold. According to reports, at least eight civilians were killed, among them four children. In addition to the continuing armed attacks, and especially since the renewal of the Syrian government’s attack on Idlib in November 2019, hundreds of thousands have fled their homes, many of them having already been displaced in the course of former attacks.
When the Syrian conflict is approaching the end of its ninth year, and being one of the longest civil wars in the twenty- first century, one question still pokes out: why have the international community and international law been unable to suggest effective solutions for this seemingly endless conflict, if not completely stopping it?
The answer is complex and rests on both legal and political reasons. It is well known that international law, as Sir Hersch Lauterpacht famously recounted, rests “in the end of law.” Several interpretations can be ascribed to this statement, and one of them is that international law is among the weakest branches of law. Its Achilles’ heel is enforcement, that is, in many cases, international law has no significant ability to enforce its rules.
Inability to enforce is a major characteristic of the international community’s activities is Syria. In August 2011, as early as the disturbances in Syria broke out, the United Nation’s General Assembly has set up “the International, Impartial and Independent Mechanism to assist in the investigation and prosecution of persons responsible for the most serious crimes under International Law committed in the Syrian Arab Republic since March 2011.” The mechanism’s mandate is to prepare the ground for fair and independent criminal proceedings (either in national or international tribunals) with regards to violations of international humanitarian law and human rights law committed during the Syrian conflict.
However, neither an independent national court nor an international tribunal has met the challenge; and President Assad (though not the only person accountable for international crimes but perhaps the most notorious one in Syria) is under no threat of arrest for such crimes. The international criminal court- the ICC- probably the most “natural” court for such proceedings is incapacitated in this case. Because Syria is not a party to the Rome Statute (which is the ICC’s founding treaty), an investigation of the Syrian conflict can be authorized only by a UN Security Council’s decision. Such a decision cannot be reached when Russia vetoes it, as it has consistently done since 2015.
The Russian and the Chinese veto has also impeded other UN Security’s Council’s initiatives regarding this conflict, such as a draft resolution from December 2019, suggesting to add a crossing point in Turkey for Syrian refugees (in addition to the two that already exist in Turkey and single ones in Jordan and Iraq).
Yet, it is not only the UN’s structure and mechanism that inhibit international community’s actions to alleviate the suffering in Syria. It is also the superpowers’ contrasting political interests in the area that prevented an international armed operation. While Russia is interested in protecting Assad, the US and other Western superpowers had no will to risk the lives of their soldiers in order to protect civilians in a foreign country. Therefore, they could and did also use the pretext of the prohibition under international law to invade the territory of an independent state, without its authorization.
Truly, the concept of Responsibility to Protect (RtoP, also called humanitarian intervention) can be raised as a counter argument to justify such an international intervention. This was argued when the Syrian government attacked the rebels, civilians included, with chemical weapons. However, again, the superpowers clung to the weakness of the RtoP doctrine under international law, and the warnings raised against it being exploited for unworthy purposes, such as colonial expansion.
The conclusion is almost as despairing as the ongoing misery of the conflict. The Syrian conflict stands out in its singularity in comparison to former similar bloody conflicts, such as the civil wars in former Yugoslavia and the genocide in Rwanda. In those cases,  the international community was more united and managed to act both militarily (against Milosevic tyrant regime in Serbia) and legally after the fact by establishing the ad hoc tribunals for trying those accountable for international crimes (in the Hague- for the conflict in former Yugoslavia and in Arusha, Tanzania, for the conflict in Rwanda). However, in the Syrian case, nothing of this was accomplished, as the different and contrasting interests of the superpowers worked against such actions and international law was used or perhaps misused to justify the inaction.
*The blog was also posted on IntLawGrrls, Twitter and ATLAS. 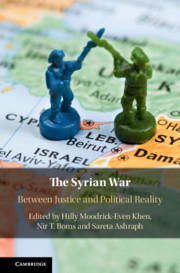 About the Author: Hilly Moodrick-Even Khen

Hilly Moodrick-Even Khen is Lecturer at the Ariel University, Israel. She is author of National Identities and the Right to Self -Determination of Peoples: 'Civic- Nationalism- Plus' in Israel and Other Multinational States (2016); Terrorism and International Law: Combatants and Civilians in Modern Battlefields (2010) [Hebrew]; and of articles in s...

About the Author: Nir T. Boms

Nir Tuvia Boms is Research fellow at the Moshe Dayan Center, Tel Aviv University and at the International Center for Counter Terrorism in Hertzliya. He is a member of the board of the Israeli Council of Foreign Relations, Co-Founder of CyberDissidents.org and the Tiyul-Rihla project. He is co-author of Expat-ing Democracy (with Peter Lang, 2016), a...

About the Author: Sareta Ashraph

Sareta Ashraph is a Barrister specializing in International Criminal and Humanitarian Law at the Garden Court Chambers. Previously she served as the Analyst on the International Independent Commission of Inquiry on the Syrian Arab Republic, documenting violations of international law in the context of the ongoing conflict in Syria....