Anne Finch and the “publick view” 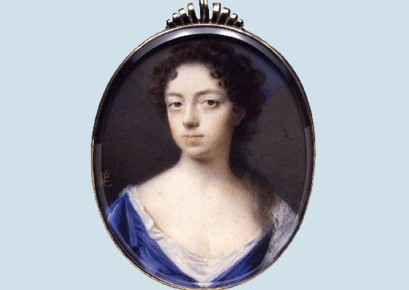 Long before I decided to work on a scholarly edition of Anne Finch’s work, I was drawn to her distinctive voice. I first heard it as an undergraduate student in the 1980s, but in the least propitious circumstances. A professor who admired Alexander Pope’s poetry asked the class to turn to just one of the three poems by Finch printed in our anthology, her “Adam Pos’d.” His goal? To demonstrate Pope’s greatness and Finch’s, as he charged, deserved insignificance. I had to object. “Can’t you see,” I asked, “that Finch and Pope were doing different things”?

I would learn later that other readers also admired her work. Indeed, although that professor never mentioned it, Pope lauded Finch’s poetry and flattered her by echoing her words in a wide range of his poems. Lady Mary Wortley Montagu kept manuscript copies of several poems by Finch in her personal miscellanies. Writers as different as Jonathan Swift and William Wordsworth extolled her art. In recent years, Barbara McGovern has described Finch as “the best woman poet England produced before the nineteenth century,” and Susan Staves has praised Finch’s sole authorized print collection—Miscellany Poems, on Several Occasions—as “the most accomplished volume of poems published by a woman between 1660 and 1789.” Finch’s work has garnered the interest of a number of readers who have explored not only how she was “doing different things” relative to some of the male figures once populating the canon, but also how her art participated in major literary, cultural, and political currents of her time.

Amazingly, readers have studied Finch’s oeuvre without a scholarly edition. Appearing nearly 300 years after her death, The Cambridge Edition of the Works of Anne Finch, Countess of Winchilsea is the first scholarly edition of her corpus, providing authoritative texts, textual apparatus, and commentary for all of her known works. Volume 1—Early Manuscript Books—establishes the texts of Finch’s early manuscript books intended only for the eyes of her manuscript circle: “Poems on Several Subjects” and “Miscellany Poems with Two Plays.” Using Finch’s manuscripts as copy-texts, Volume 1 provides a fresh view of many works that have been previously known only as they were revised in Finch’s 1713 print volume. The print edition is supplemented by the open-access Anne Finch Digital Archive, which features detailed information about selected poems, allowing readers to study high-resolution images of their print and manuscript source copies, see the poems’ iconographical contexts, and hear them read aloud.

For most of her life, Finch eschewed print, or what she called the “publick view” (“The Introduction,” line 1), choosing, instead, to arrange and circulate her work in these manuscript books. Although she released several individual poems to be printed in miscellanies with poems by multiple authors, only in her last decade did she authorize the printing of a volume of her work, Miscellany Poems, on Several Occasions (1713). In her view, to print an entire volume of her work would submit it to the vast sea of unknown readers, many of whom she had seen wallow in her era’s acrimonious critical habits. As she explained in “The Introduction,” a poem that only reached print in the early twentieth century,

many, have attain’d, dull, and untaught

The name of Witt, only by finding fault.

Finch was particularly mindful that many readers would condemn her work simply because a woman wrote it. In the same poem, she ruefully mimics the scorn of this “opposing faction”:

Alas! a Woman that attempts the pen,
Such an intruder on the rights of Men[.]

With the conviction that her readers today are in a much better position to be able to hear and to understand her distinctive voice, I welcome you to The Cambridge Edition of the Works of Anne Finch. 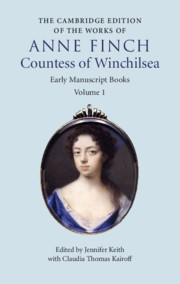 About the Author: Jennifer Keith