Whatever else religious experience is, it is experience, and it should be assessed accordingly. It is not a belief, a theory, or a creed. Instead, it is a kind of awareness that attracts one’s attention, even if one has not (yet) focused on it. The awareness, as experience, is qualitative in presenting to a person  Being thus qualitative, it differs from a mere belief, theory, or creed. It does not reduce to a judgment that something is the case. Experience includes a perceptually felt presence to one’s awareness, with features having more or less definiteness. (I use ‘perceptually’ broadly, in a way irreducible to what ‘sensory’ typically connotes.)

A longstanding controversy concerns what the qualitative content for religious experience is. Some theorists, following William James, deny that ‘religion’ has a common core of meaning grounded in a shared qualitative experience. They hold that the term has a diversity of senses that resists a uniform definition and blocks a common underlying religious experience. In Understanding Religious Experience, I offer a case for a core religious experience and a corresponding common sense for ‘religious experience’. The core depends on an experienced value regarding the overarching meaning of human life for a person. This meaning is unifying for a life overall in giving it a broad purpose, and it is practical in giving it general guidance for action in life. It thus would counter human indifference toward living a human life.

Many people assume that religion and religious experience must be understood in terms of God, however God is conceived. This is a mistake, as the book explains. Religion and religious experience can be either theistic or non-theistic. This consideration fits the empirical fact that various prominent species of religion are non-theistic. Such species include variations on Confucianism and Buddhism that do not require belief that God exists. We can make sense of such non-theistic religions, as religions, on the basis of the book’s account of religion in terms of experienced value for life’s overarching meaning. Acknowledgment of God is not required for such meaning, as various non-theistic religions illustrate. The book confirms this fact.
Turning to theistic religion, the book offers an account of religious experience of a morally good God worthy of worship. Such a God, via self-manifestation, would have a distinctive moral quality in human experience that bears on life’s meaning, thus being susceptible to a religious experience by humans. Human moral conscience could relay the divine self-manifestation as uncoerced leading toward human participation in God’s moral character. This would be goal-directed leading that, in being intentional, would be guided by a personal agent. It would manifest a personal moral character, in conscience, that qualifies as divine when worthy of worship. God would aim to be morally convicting and leading in that way, in virtue of being worthy of worship and thus morally perfect. I contend that some human moral experience indicates the presence and reality of such a morally challenging agent.

The book allows for variation in evidence for God in moral experience among people. It explains why God would hide divine evidence from some people, owing to their not being ready to cooperate, willingly, with such evidence. Timing would matter in divine redemption and thus in divine self-manifestation. The book also deflates some commonly proposed defeaters of theistic evidence, from devastating evil and religious diversity. In doing so, it explains how religious experience can supply needed evidence for theistic religion of a morally commendable kind. 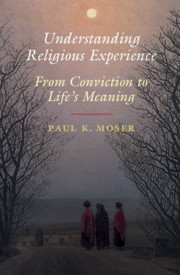 About the Author: Paul K. Moser