In my recent Cambridge University Press book, A Renaissance of Violence, I document a frightening rise in civil violence in the Italian city of Bologna in the seventeenth century. I show how what began as a spike of homicides in the rural countryside in the 1630s moved into the province’s urban core by the 1650s and became a full-fledged civil war in that decade. Through the 1660s, the city’s elite resumed practices of vendetta-as-politics that constituted a full-fledged assault on the institutions, fragile at the best of times, that had created a measure of peace and civil society in Bologna since the city’s papal conquest in 1506. The papal emperor was shown to have no clothes as urban and rural authorities were largely powerless to prevent this outbreak of factional violence.

Thirty years of increasing civil violence in Bologna was preceded, and prompted, by a series of socio-economic and environmental crises in the 1610s and 1620s. In the 1610s Bologna saw its traditional manufacturing industry, silk textiles, contract and decline as a more globalized economy saw international markets turning to new producers of luxury cloth. The financial pinch felt by Bologna’s merchant and industrial populations was exacerbated in the 1620s, when a series of poor harvests led to widespread food shortages and rising bread prices across the province. A weakened and hungry population was then struck by calamity when, in 1630-31, the worst plague to strike North Italy since the Black Death of the 1340s swept southward from Germany and killed thousands of Italians from Milan to Venice, reaching as far south as Florence.

Bologna lost 25% of its population in the city and a comparable amount in the hinterlands. Moreover, as the plague approached, the city’s papal governor instituted a series of increasingly onerous quarantine policies in an effort to prevent plague entering the city. Guards at the city’s gates were admonished to refuse entry to a wide variety of goods, restricting the level of commerce; when the plague struck despite the closing of the city walls, effluent-producing work such as butchery was confined to narrow areas of the city, and women were cloistered in their homes for the duration of the plague. The city’s powerful criminal court, the Tribunale del Torrone, expanded its authority over the daily lives of citizens and inserted itself more deeply into the fabric of Bolognese social life. And yet, despite all these measures and the growing intrusion of papal authority into the lives of Bolognesi, 25% of them died. Papal authority and its institutions were proven powerless against the plague, and both ordinary people and elites abandoned the fragile social accords that had restricted homicide rates in the early seventeenth century. Thirty years of undeclared civil war followed suit.

A historian should always be wary of drawing too neat a line from past to present, but I am frequently asked about what my research means for current societal problems. My answer is that, while Bologna in the seventeenth century is a very different place than the 21st-century West, our institutions are under pressure from external environmental threats in the form of climate change and from internal challenges in the form of rising political anger determined to undermine, if not destroy, the institutions that have upheld liberal democracies for more than half a century. The social trust that, in an idealized vision, bound Western societies together in the latter half of the twentieth century cannot be said to exist anymore. Our institutions neglected and abused marginalized communities when they should have been fostering institutional trust among those communities; what’s more, the populations that have benefitted most from our institutional structures are now turning towards a politics of anti-institutionalism. Our democratic institutions are under assault from within at the very moment that an external existential threat requires those institutions to create a united response to climate change in order to maintain the way of life we have enjoyed.

Do I think our society is liable to fall into civil war as our institutions lose their legitimacy in the face of climate disaster? I don’t know, and I don’t think I should predict the future from a very different past. But historically, homicide rates and interpersonal violence rise as trust in the structures and institutions of society decline; as one liberal democracy after another faces a surge of populist, nativist anger, those institutions need to make the case for why they can help people achieve a peaceful and stable life. If they cannot make that case, as the papal government of Bologna could not in 1630, then people may very well pursue the politics of violence that shook Bologna in the seventeenth century. 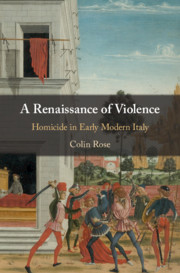 A Renaissance of Violence by Colin Rose

About the Author: Colin Rose

Colin Rose is Assistant Professor of European and Digital History at Brock University, Ontario. He has held fellowships with the Harry Frank Guggenheim Foundation, the Centre for Criminology and Criminological Studies at the University of Toronto, and the Academy for the Advanced Study of the Renaissance. He is co-editor of Mapping Space, Sense and...