Why put a Native American object on the cover of a book about Jacobean politics?
The image that appears on the cover of The Making of an Imperial Polity is a headdress from Guiana (now Guyana), a region of Greater Amazonia that the English sought to explore and colonize from the second half of the sixteenth century. Though striking, this image may at first glance have little to do with Whitehall, parliament, or the sociability of gentlemen in early modern London.

This apparent disjuncture is precisely what my research confronts. The oral histories and cultural memory of numerous indigenous groups view the world of Pocahontas and James I, of court fashions and Chesapeake waterways, as a deeply interconnected and highly topical one. Yet colonization is often viewed as an ‘elsewhere’, something that happened in distant territories that are peripheral to English socio-political change. I initially set out to reveal the range of Anglo-American interactions that saturated London; but in the end, making a case for the breadth of cross-cultural knowledge-exchange also opened up much broader insights into seventeenth-century political developments. My book contends that placing colonization within the ‘civilizing project’ of post-Reformation England renders empire an integral, often intimate part of policy-makers’ understanding of themselves and the nature of their polity. Our understanding of Jacobean political culture, of English civil society and how this was debated in the seventeenth century, is impoverished when colonialism is relegated to American or colonial history alone. Viewing how statesmen assimilated or responded to colonial experiences, from the concepts they developed to their attempts to govern peoples beyond the British Isles, can help address the ‘imperial amnesia’ (or indeed evasion) that haunts so many debates about English identity today.

Civility – the diamond-hard ‘adamantine chains’, in George Chapman’s evocation, of civil society and how it might be upheld and expressed – provides the key for understanding this relationship between England and America in this period. The Earl of Southampton, better known for his literary patronage and rather flamboyant lifestyle, served as treasurer of the Virginia Company and specifically viewed ‘the Civilizinge of the Indians as a matter of the greatest consequence’. Civility was a concept that involved political organization and social relations, meaning it implicated the behaviour and honour of gentlemen on a deeply personal level. The ‘care that I have of this [Virginia] plantation’, wrote the lawyer Richard Martin in 1610, is a ‘fire that doth not onlie burn in mee, but flames out to the view of everyone’.

Policy-making, however, depended on social relations, and gentlemen increasingly viewed colonization as a fashionable means of participating in metropolitan life. In seeking to illuminate the tensions, devastations, and imaginative possibilities that infused the crossover between colonization and domestic politics and taste, The Making of an Imperial Polity adopts an interdisciplinary approach to political culture, situating material culture alongside literary sources and textual discourse. There are discussions of ‘commodity clusters’ and the kinds of objects that circulated in the Atlantic, from the ruffs and Venetian glassware in Jamestown to the furs and feathers that made their way into the metropolis. An extant expense book offers a window into how colonial goods became integrated within metropolitan sociability, where dinners with friends ‘newly arrived from Virginia’ were interspersed with expenditures for tobacco, beaver fur hats, and dining at the Mermaid Tavern, a place where wits met to drink, circulate poetry, and discuss state affairs. New readings of canonical literary texts bring performances and courtly devices into a consideration of how colonization became a recognizable element of elite sociability. At the Inns of Court, a potent Native American intoxicant – tobacco – quickly became assimilated into ideas of poetic inspiration. Mock-heroic verses celebrated conquest as a means of creating refined individuals at home.

The emphasis on colonialism in this study, rather than, say, global trade, is a deliberate one. Colonization is one aspect of the many relationships with foreign powers and local peoples that the English developed in this period through travel, trade, and diplomacy. My focus is on territorial expansion prior to mass migration, when those who governed the realm viewed themselves as directly responsible for creating systems of oversight in colonial spaces. Though Virginia was still fledgling, John Pory wrote to his friend the ambassador Dudley Carleton, ‘your worship may live to see it a flourishing Estate’. Land, after all, was a critical draw for gentlemen looking west. Examining estate management and ideas around governance and elite honour has allowed me to reconsider James I’s own involvement with the colonies, particularly after 1619. This has also led to new insights, discussed in the book’s conclusion, about male friendships and how these contributed to political expansion while distinctly shaping the character of transatlantic sociability that began to emerge in the 1610s and 20s.

Though I concentrate on English political culture, I hope readers gain a sense of the beauty and power of Native American societies, and their resistance to the devastation that followed attempts to invade, appropriate, or destroy their cultures. Which brings us back to the headdress on the cover. It is an object that in some ways speaks for itself, its existence unencumbered or unfiltered by the writings of Jacobean colonists. It provokes us to ask different questions about the making of the imperial polity – who gained from it, who did not, and what kind of knowledge is conveyed in the sources we use. To me, this poignantly evokes what indigenous writers refer to as ‘survivance’, Native Americans’ ability not only to endure trauma, but to thrive despite Europeans’ persistent attempts to eradicate their ways of life. From its plaited basketry base to the fraying macaw feathers, this fragile yet assertive object is itself a marker of survival. But its presence in an English collection is a reminder of the entanglement between England and indigenous America, and of the debates, tastes, and social habits that emerged as a result of initial contact. From Donne’s ‘no man is an island’ to Shakespeare’s ‘the isle is full of noises’, the impossibility of English insularity, and the self-reflection sparked by exploration and the desire to possess, emerges in leading voices of the era. To this we might add the reverberation of Pocahontas’ words to John Smith, reputedly spoken shortly before her death in London in 1617: ‘I will be for ever and ever your countryman’. 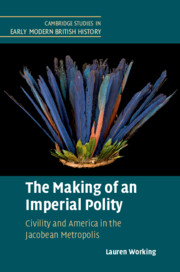 The Making of an Imperial Polity by Lauren Working

About the Author: Lauren Working

Lauren Working is Research Associate on the ERC-funded TIDE project (Travel, Transculturality, and Identity in England, 1550–1700) at the University of Oxford. She has held fellowships at the Jamestown archaeological site and the Royal Anthropological Institute, where she continues to develop methodologies and projects that explore indigeneity, c...