Arendt on the Political: An Interview with David Arndt

Let’s start with a simple question.  What is your book about?

It’s on the question: What is politics? What defines the political sphere? How is politics different from economics, law, morality, religion, or warfare?

Why do these questions matter?

They underlie questions of democracy: What view of politics is conducive to a strong and just democracy? And what views tend to weaken and corrupt democracy?

And your answer is…?

There are several views that are weakening and corrupting American democracy. Politics is viewed in economic terms, in technocratic terms, in religious terms, etc. But the most common view today understands politics as a war for power. The rhetoric of politics as warfare permeates American political discourse.

What is wrong with seeing politics as war?

When we see political opponents as enemies, we tend to make words into weapons. Our discourse devolves into spin, distortions, propaganda, disinformation, and lies. This is self-defeating for a democratic republic. It weakens our ability to act effectively and to move towards justice. Justice only comes through truth, the whole truth, and nothing but the truth.

But who possesses the whole truth?

No one has a monopoly on truth. Arendt said this explicitly. We are in touch with reality to the extent that we can see it from many points of view, and we can do this only by deliberating with others, trying to persuade them and being open to their persuasion.

There are many political theorists. Why did you turn to Arendt?

Arendt said something striking: Western philosophers have never had a pure concept of the political. The metaphysical assumptions implicit in their basic questions led them astray. Her aim was “to look at politics, so to speak, with eyes unclouded by philosophy.”

How did she do that?

I think she approached political theory in a new way. Her approach had three aims:

(1) To “critically dismantle” the concepts we have inherited from philosophical traditions.

(2) To retrieve the authentic insights of people who have experienced political life first-hand.

(3) To sense what has been obscured by inherited concepts, and to re-work those concepts in order to bring to light what has been beyond the reach of conceptual thought.

Could you give me a concrete example of her approach?

Her approach is clear in her book on the American Revolution. Arendt thought that the force of circumstances led the American colonists to invent new practices of self-government and that the experience of self-government led them to authentic insights into the realities of political life. But their innovations in practice were not matched by innovations in theory; they interpreted their experiences in inherited concepts, instead of rethinking inherited concepts in light of their own experiences.

So there is a gap in their discourse between explicit theory and implicit insight. In her reading of the Declaration of Independence, Arendt tried to show the limits of the concepts inherited from the British tradition, but she also tried to locate the authentic insights implicit in the text, and to “translate” those insights “into the less direct but more articulate language of political thought.”  She drew on the Revolutionaries in her effort to rethink the nature of power, authority, force, violence, law, contract, government, and freedom.

Is her reading of the Declaration of Independence still relevant today?

Yes, but–sorry–that question is too big to answer in a few words. I’m afraid you’ll have to read the book.

I have worked with many academic presses, and Cambridge has been–beyond comparison–the most responsive, astute, and professional. I am especially grateful to my editor, Hilary Gaskin, who helped make the book better in many ways. Heartfelt thanks to her for everything. 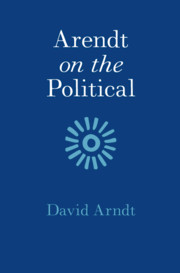 Arendt on the Political by David Arndt

About the Author: David Arndt

David Arndt is Tutor in the Integral Program at St Mary's College, California, where he teaches literature, philosophy, and Attic Greek....