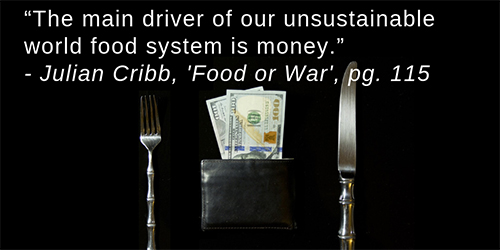 The world food system on which nearly 8 billion humans depend for their daily sustenance is at risk of disintegrating by the mid-century as global soil and water resources and climate stability fail.

I lay out the case for a worldwide food revolution in ‘Food or War’.

‘We know only too well from history what happens when people fear their food supplies may fail – they fight. Historically most wars are driven, at some level, by conflicts over food, land and water. This is a danger that confronts us all in the 21st Century.”

Food or War documents the wars – past and present – and projects future hotspots for human conflict based on the likelihood of failure in the key resources needed for food production.

However, it also puts the case that the reinvention of the global food system can become the most powerful ‘weapon for peace’ ever devised.

Mounting scientific evidence shows most of the world soils are in poor to very poor condition, and that we are losing from 40 billion (FAO) to 75 billion (USGS) tonnes of topsoil per year. Forty per cent of this is used to grow food that is never eaten.

The world water situation is even more critical: throughout the world’s drier regions rivers and lakes are vanishing, glaciers shrinking and the water urgently needed by farmers to grow food is being stolen from them by swollen megacities and by oil, coal and gas corporations.

At the same time the cool, stable Holocene climate in which both agriculture and cities were born is now extinct. A world two degrees hotter, or more, confronts traditional food growing systems with increased risks of famine, hunger, mass emigration and conflict.

“The central fact is unmistakable: humanity now depends on a shrinking resource to create an expanding food supply,” Food or War cautions.

In Food or War, I describe a future-proof global food system based on advances now being made by wise farmers, scientists, aquaculturalists and food producers worldwide, who have recognised our present system is unstable – and that a new world diet and food system is essential.

“Thanks to the internet and social media, ideas about how to achieve this are flying round the Planet at lightspeed. We are embarking on one of the greatest and most inspiring eras in all of human history – The Age of Food.”

“Thanks to the internet and social media, ideas about how to achieve this are flying round the Planet at lightspeed. We are embarking on one of the greatest and most inspiring eras in all of human history – The Age of Food.”