Religion and Brazilian Democracy: Mobilizing the People of God 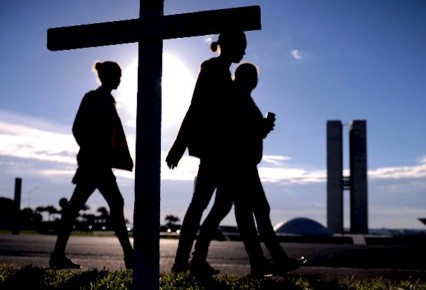 In August 2014, about seventy evangelical clergy in the Brazilian city of Juiz de Fora gathered for the monthly meeting of the local Council of Pastors. The worship/meeting space was an unadorned hall with white-painted cinderblock walls and the stage at the end farthest from the street entrance. After two and a half hours of breakfast and then worship music and prayer, the keynote speaker got up: the president of the tiny Liberal Christian Party, visiting from the Federal District. Over the next hour, Pastor Osésa enumerated the social and political threats facing evangelical churches. The LGBT movement loomed large: gay couples were infiltrating churches to gather material for anti-discrimination court cases, Pastor Osésa said. They also threatened public schools by trying to include “new genders” in the curriculum.

A couple of months later, my research assistants and I sat in a one-room apartment in a poor neighborhood talking with several members of the Disciples of Love Catholic prayer community. José Luiz*, their informal leader, explained that, “People on the margins of society are our brothers.” Describing his own rough past, he told us that, “Just from a [psychological] complex, I excluded myself [from church]….People call the child of God a vagrant, a prostitute, even though no one reaches out their hand to help that person.” The community accepts gays: “Our rule for life, our statute—we include the excluded.” He still believes homosexuality is a sin, but the church “can’t be moralistic.”

The October 2018 election of far-rightist Jair Bolsonaro as Brazil’s president, with strong support from evangelical and Pentecostal groups, highlighted the growing political importance of religious divides in Brazil. Today, politicians, citizens, and clergy debate the social roles of gays, the morality and legality of abortion, and the proper relationship between religious groups and the state.

Yet the roots of Bolsonaro’s rise extend to the early days of Brazil’s post-1985 democratic regime. In Brazil and other democracies across both the developed and the developing world, social conflict over “culture wars” issues has arisen when religious conservatives reacted against rapidly changing public policy and attitudes with respect to sexuality and the family.

This new monograph asks: first, how have Brazil’s culture wars developed? Second, how have they shaped democracy in the post-1985 democratic period? Using qualitative fieldwork, surveys, and survey experiments, I develop a new explanation of the causes and consequences of religious politics in Brazil.

Scholars have long proposed a key explanation of the culture wars in well-established democracies such as the United States: party leadership. However, Brazil is famous for the weak roots of its political parties, especially on the right. Consequently, commentators often note that evangelical alliances in Brazil are “pulverized” across a large number of candidates and parties – ones chosen based on personalistic ties, rather than clear ideological criteria.

Instead, my explanation foregrounds clergy. As evangelical and Catholic clergy have responded to intensifying competition with their religious rivals for members, and to a leftward drift in the national policy agenda, their religious teachings on sexuality and the family have polarized. As a result, my qualitative and quantitative research reveals that Brazil’s culture wars are fought simultaneously on two fronts: between Catholics and evangelicals, and between religious and secular groups.

In the end, clergy are only partially able to impart their views to citizens and politicians. Many citizens are skeptical of clergy engagement in politics – mitigating religious polarization. Yet in Brazil’s highly porous party system, religious leaders have great latitude to select, sponsor, and influence candidates.

However, Brazil’s new era of religious politics has also helped to shore up democracy in the midst of crisis. Evangelical politics improves representation of citizens’ issue positions and identities. Most strikingly, though, Catholic and evangelical clergy overwhelmingly support democracy, and convey basic civic norms through church-based politics. If religious politicking doesn’t lead to the downfall of Brazilian democracy, it may save it.

*With the exception of public events, names are anonymized throughout the book. 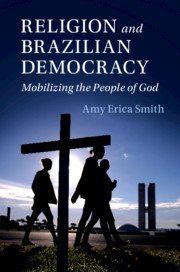 About the Author: Amy Erica Smith

Amy Erica Smith is associate professor of political science at Iowa State University. Smith's research has attracted funding from the National Science Foundation, Fulbright, Mellon, and Templeton, and the Award for Early Achievement in Research at Iowa State University. Her work on democracy in developing countries has appeared in top political sci...