No state can do without taxation. States need to pay for bureaucrats, soldiers, policemen, infrastructure, and the more ambitious ones also pay for schools, hospitals and social security programs. Fiscal capacity forms the backbone of the state, and both sovereign and colonial regimes confront the revenue imperative. But how, in the case of colonial rule, are taxes imposed and collected? Who pays and who benefits? And how did locals respond to the attempt of the colonial government to centralize revenue and extract resources? Did colonial governments follow a blueprint of fiscal development, or did they adapt to local circumstances?

Until the early nineteenth century, European colonial control in Asia and Africa was largely confined to a handful of coastal and island settlements. These settlements functioned as little more than trading posts. The officials running them had neither the resources nor the need to develop new fiscal instruments. But with the territorial expansion of several European powers and the Japanese, the costs of maintaining colonies rose. Home governments, reluctant to place the financial burden of imperial expansion on metropolitan taxpayers, pressed colonial governments to become fiscally self-supporting. How did colonial governments approach this challenge?

In Fiscal Capacity and the Colonial State a team of leading historians, led by professors Anne Booth and Ewout Frankema, compared the ways in which over 30 African and Asian colonial states set up their fiscal systems. Their research sheds new light on the process of colonial state formation and the legacies colonial rulers left behind at independence. Their study produces four main conclusions.

First, the authors find that there is strikingly little uniformity in colonial fiscal systems across Asia and Africa. Colonial governments all managed to centralize revenue, but they exploited very different sources and adapted their systems to local economic and political circumstances. In some colonies such as the Gold Coast (Ghana), Gambia and Malaysia, international trade taxes largely sufficed to fund the state. In many other African colonies direct taxes, in the form of hut or poll taxes were imposed to generate revenue. Some colonial administrations in Asia and Africa, such as those of the Netherlands Indies, Portuguese Africa, the Belgian Congo and French West Africa, relied heavily on forced labour for extended periods of time, while in other colonial states free indigenous labour was attracted to produce export commodities. Indeed, it is not easy to characterize colonial fiscal systems in generic terms. What the book shows is that colonial states were far from omnipotent and that the most efficient way to fill the treasury was to tax trade. Globalisation, even if compulsory, mattered for fiscal state formation.

Second, the expenditure accounts of colonial states were more alike. All states spend significant sums on expanding bureaucracies, public works (and debt repayment) and law and order. The choices to invest in human resources, such as education and health, appeared to be related to the ideologies promoted by the metropole. The Americans in the Philippines, for instance, invested much more public money into a system of mass education than the Dutch were willing to spend in Indonesia. The British were more open to the involvement of Christian missionary societies to provide schooling, while the French promoted a system of public education, financed by local tax revenues.

Third, the team has explored the possible differences in fiscal development between Asian and African colonies. Contrary to popular impressions, such differences were not easy to uncover. Forced labour, trade taxes, excises, public debt, infrastructural investments and expanding bureaucracies were observed everywhere, and there existed as much variety within as across both regions. A deeper look into the tax systems, however, has revealed more fine-grained tax systems in a number of Asian colonies, which were built on higher levels of commercialisation and monetization. In Africa, forced labour schemes were maintained for a longer time, and the reliance on mining revenues or mono-crop exports was larger. Both features made the African fiscal state more vulnerable to world market shocks.

Fourth and finally, there is the issue of public debt. While earlier scholarship has pointed out that colonial states benefitted from access to cheap capital supplied by financial markets in the metropole, this book shows how dependent these countries became on these loans. After independence, many of the former colonies in Africa became trapped into a severe debt crisis, with local currencies losing value, rampant inflation and skyrocketing debt burdens. The funds supplied by metropolitan investors were a mixed blessing. They offered resources to invest in the economy (especially in public works such as railways, harbours, roads, utility provisions), but they also choked opportunities to strengthen local ties between ‘state’ and ‘citizen’. Indeed, fiscal capacity building in colonial states remained largely a matter of ‘taxation without representation’. 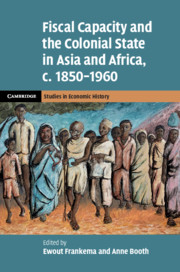 Fiscal Capacity and the Colonial State in Asia and Africa, c.1850–1960 by Ewout Frankema and Anne Booth

About the Author: Ewout Frankema

Ewout Frankema is Professor and Chair of Rural and Environmental History at Wageningen Universiteit, The Netherlands. He is editor-in-chief of the Journal of Global History and research fellow of the UK Centre for Economic Policy Research (CEPR)....

About the Author: Anne Booth

Anne Booth is Professor Emerita at School of Oriental and African Studies, University of London. She has researched on the economies of Southeast Asia in both the colonial and post-colonial eras, and has written and edited a number of books on the region as well as articles in journals....