Did the Nazi dictatorship spell the end of privacy?

German soldier on home leave with his family, 1942.

When we think about Nazi Germany, we think of lives spent in the glare of the regime’s malign surveillance, of pressure to join organizations and display enthusiasm at mass events. Robert Ley, head of the German Labour Front, famously proclaimed that there was no such thing as a private individual in Germany any more.  And for many, the pull of an inclusive (but also exclusionary) ‘national community’ was deeply felt. However often the notion of the regime as ‘totalitarian’ has been criticized, it continues to shape common understandings of regime and society. But are these impressions deceptive? We have brought together a multi-national and multi-disciplinary team of scholars to test some of these assumptions. The resulting book shows how much more complicated things were.

Of course, for some, privacy was being eroded.  Many expressed their discomfort at the boundaries around a private realm being dissolved.  And for those who by virtue of ‘race’ or political record were already in the regime’s sights, the feeling of security within one’s four walls and of being able to shield oneself from outside scrutiny was very quickly destroyed.

And yet, as this book shows, there is much more to explore about ideas and practices concerning private life under National Socialism.

Boundaries between ‘public’ and ‘private’ did still exist, even though they changed.  Some Germans were simply oblivious to the fact that basic rights to privacy – the confidentiality of personal letters, for instance – had been abolished in 1933, and they complained to the Nazi Party about breaches of their ‘personal business’. Court decisions in a variety of cases upheld certain norms concerning confidentiality: married couples should, said the judges, be able to trust each other within their four walls without fear of being denounced by their spouse for subversive talk.

And at least in the early years of the regime, whatever the incursions by unsympathetic neighbours and official snoopers, people found ways to express private opinions discreetly.  For instance, on days when Goebbels ordered the German population to ‘put out flags’, some used a smaller swastika flag, or an older flag, to signal a modest distancing from the regime.  And German Jews, at least until 1935, could put out a swastika flag to blend in and be left alone.  Later, in wartime, privacy was also defended in situations of much harsher exposure to Nazi surveillance. ‘Ethnic German’ mothers in Nazi-occupied Poland, regarded suspiciously by the authorities both for their seemingly questionable ‘Germanness’ and their readiness to do business with Poles, shielded themselves and their Polish midwives from the zealous efforts of the German midwives sent from the Reich.  And in the ghettos in occupied Poland, in the most extreme situations of violence and intimidation, Jewish ghetto inmates recorded their efforts to defend small spaces and brief moments of privacy as part of the daily struggle to retain their individual identity and sense of purpose.

Far from consistently proclaiming an end of private life, the regime wanted to be seen to be fostering and protecting it as a resource and a reward for ‘valued’ ordinary Germans, particularly for soldiers, for whom home leave was proclaimed officially to be dedicated to the ‘private happiness of the soldier’.

Finally, many Germans did not insist on a separation between their private persona and Nazi politics at all.  On the contrary, many used private diaries, letters, and photo albums to align themselves with the regime, draw on ideology to achieve their private ambitions, and position themselves at the cutting edge of the ‘new age’ supposedly achieved by Nazism.

About the Editors
Elizabeth Harvey is Professor of History at the University of Nottingham. She has published extensively on Weimar and Nazi Germany, particularly on gender history, the history of youth and the history of photography. She is the author of Women and the Nazi East: Agents and Witnesses of Germanization (2003) and is currently working on the history of gender and forced labour in occupied Poland. Johannes Hürter is Head of the Research Department Munich at the Leibniz Institute for Contemporary History Munich-Berlin and Adjunct Professor of Modern History at the University of Mainz. He is a leading expert on the political and military history of Weimar Germany and the Third Reich. His works include Hitlers Heerführer: Die deutschen Oberbefehlshaber im Krieg gegen die Sowjetunion 1941/42 (2006) and Hitler: New Research (2018), edited with Elizabeth Harvey. Maiken Umbach is Professor of Modern History at the University of Nottingham. She is co-director of Nottingham’s Centre for the Study of Political Ideologies, and Principal Investigator of the AHRC-funded project ‘Photography as Political Practice in National Socialism’. She has published extensively on the relationship between subjectivity, identity politics, and ideology in modern European history. Her works include Authenticity: The Cultural History of a Political Concept (2018) and Photography, Migration and Identity: A German-Jewish-American Story (2018). Andreas Wirsching is Director of the Leibniz Institute for Contemporary History Munich-Berlin and and Professor of History at the Ludwig-Maximilians-Universität Munich.  He has published extensively on European political history in the nineteenth and twentieth centuries and the history of the European Union. His most recent works include Hüter der Ordnung. Die Innenministerien in Bonn und Ost-Berlin nach dem Nationalsozialismus, edited with Frank Bösch (2018). 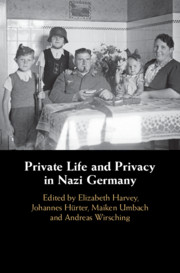