What Can a Centenarian Crocodile Tell Us About Russian History and Culture?

Great children’s stories embody the spirit of nations. How else would they become classics? Kornei Chukovsky’s Krokodil, Soviet Russia’s first children’s story, appeared when Russian culture was pivoting from its prerevolutionary past to a Soviet future.  By nature, rather than design, the work carried key features of earlier cultural traditions and presaged changes on the horizon.

Chukovsky made his name as a cultural critic. He had written previously for children but nothing as unusual as Krokodil. He composed the story to soothe his feverish son while a night train carried them home for the boy’s treatment. He released the tale to a wider readership in serial installments (as had Tolstoy, Dostoevsky, and Chekhov before him) in the revolutionary year of 1917. The story first appeared in book form in 1919 when the beleaguered Petrograd Soviet of Workers and Red Army Deputies published 50,000 copies (scaled back from a promised million in light of paper shortages) to entertain readers amidst the trauma of the Civil War.  It is from the 1919 book that most educated Russians recognize the opening lines, “Zhil da byl krokodil.” 2019 thus marks a centennial.

Chukovsky’s Crocodile, as portrayed in verse and in the wonderful illustrations by RE-MI (N. Remizov), enters with the swagger of Russia’s bandits of the folk tradition; rebels adopted by countless authors of popular tales and given literary merit by the likes of Chekhov, Tolstoy, and Dostoevsky.  The foppish reptile strolls along Petrograd’s Nevsky Prospect terrorizing good citizens and consuming passers-by, including a policeman and a dog. No one dares confront him until the arrival of the tale’s Ivan the Fool character, the pupil Vanya, armed with his toy sword and conquering naivete. Vanya’s innocence overcomes the beast in Crocodile. Together they liberate the animals in the zoo and become the best of friends. The improbable storyline straddles divisions between outsiders and insiders, rebels and authority, and the intelligentsia and the people at a time when those divisions, always running in the background of Russian culture, had erupted into the streets in revolutionary action.

What sounds in a quick retelling like a saccharine tale in fact carried layers of nuance. The story could be read differently by people of different ages and in different years, and this was a defining characteristic of prerevolutionary popular culture. Children heard Chukovsky’s rhymed verse in one voice and adults in another. Lenin’s narrow-minded wife, Nadezhda Krupskaia, attacked it in 1928 for “lack of realism,” but perhaps more fundamentally for kindness amidst rising repression.  Though rarely republished afterwards, Krokodil was still sought out by waves of new readers and listeners who imbued it with interpretive irony.

Today Krokodil probably evokes the namesake satirical journal (launched in 1922 to pillory enemies of the Soviet state) rather than Chukovsky’s gentle tale. Yet, as I argue in The Firebird and the Fox: Russian Culture under Tsars and Bolsheviks, Chukovsky’s Krokodil belongs with countless other works produced during Russia’s age of genius, roughly a century from the 1850s to the 1950s. This was a time of uniquely rich interaction between and among forces molding societal and cultural change. Children’s literature gives us one lens through which to view tradition and innovation; we could also peer through music, dance, drama, poetry, art, illustration, high literature, popular culture, photography, film, and any medium of cultural expression.

In each we would find works of lasting value that draw on the complex and rich cultural ecosystem of which they were part.   As we view the legacies of Tolstoy, Dostoevsky and Chekhov; of Malevich and Tatlin; of Akhmatova and Tsvetaeva, we gain from understanding their kinship with each other, and with Chukovsky’s Krokodil. 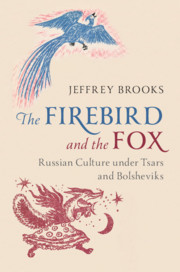 The Firebird and the Fox by Jeffrey Brooks

About the Author: Jeffrey Brooks

Jeffrey Brooks is Professor in the Department of History at The Johns Hopkins University. He is the author of When Russia Learned to Read (1985), which was awarded the 1986 Wayne S. Vucinich Prize, Thank You, Comrade Stalin (1999), and Lenin and the Making of the Soviet State (2006), with Georgiy Chernyavskiy....