The ‘why’ and ‘how’ of specific treatment of suicide risk

In parallel with an increase in the development and implementation of local and national suicide prevention actions, rates of suicide unfortunately increase in many parts of the world, including the USA. One can think of quite a few possible reasons for this apparently paradoxical situation. Prevention actions may not reach their target population, such as young people in distress. Suicidal people are hopeless and may not believe that effective interventions are available. Or perhaps there are barriers, such as stigma and taboo, due to which people do not seek help when they most need it. This barrier appears to play a major role in a group of people who continue to show high rates of suicide, such as middle-aged men. Or, if suicidal individuals seek help, mental health services may fail to provide effective help.

With regard to the latter we need to question whether we know enough to effectively prevent suicide. We know many suicide risk factors, such as depression, and we know how these can be treated. Such treatments indeed have the potential to contribute to suicide prevention by alleviating distress. However, there is insufficient evidence for the common assumption that suicide risk in depressed patients can be reduced with treatment for depression. This is the case for psychotherapy and pharmacotherapy, which both may even increase suicide risk. Current theoretical models, on which such interventions are based, unfortunately are incomplete as they include sensitive but nonspecific characteristics such as psychological pain and hopelessness: most people with these experiences will not take their own lives. It is now becoming clear that, in order to effectively prevent suicide, interventions need to be suicide-specific.

From a psychological point at view, this means that treatments need to address cognitive distortions that are specifically associated with suicidal thoughts and behaviors. Such distortions include rigid active-escape biases (a bias to do something when other options (such as doing nothing) are more effective to terminate an aversive state) and implicit identification with death (reflecting implicit associations between death/suicide and self concepts). Researchers are now investigating the fascinating possibility of changing such distortions using, for example, game-like apps. From a neurobiological point of view there is less clarity about suicide-specific distortions. The serotonin-hypothesis of suicidal behavior is now more than 40 years old, but it is clear that a disturbance in the serotonin system is not specifically associated with suicide. Medications like clozapine and lithium exert anti-suicidal effects, but again these do not appear to be suicide-specific. The introduction of esketamine as a new drug with both anti-depressive and anti-suicidal effects is promising. From a neuroscientific point of view, recent findings point at an intriguing specific involvement of one particular brain area, which is the frontopolar (or rostrolateral) cortex (FPC). Given the uniquely human nature of suicide it is relevant to note that the FPC developed disproportionally in humans when compared to other primates. Veterans who survived a penetrating injury in this particular brain area suffer less from suicidal thoughts (independent of depressive thoughts) than their colleagues who had such brain injuries in other parts of the brain. More severe suicidal thoughts in depressed individuals are related to more perfusion in the PFC, and targeted neurostimulation (using transcranial magnetic stimulation or TMS) in depressed individuals reduces suicidal thoughts together with a decrease in activity in the FPC. There thus is increasing evidence of a specific role of the FPC in suicide risk: integrity of the FPC is necessary for suicidal ideation while disturbing its activity (via lesions or neurostimulation) attenuates suicidal thoughts.

The relationship between FPC activity and the discussed specific neurocognitive alterations remains to be demonstrated. Current insights suggest that these alterations and FPC activity concurrently lie at the basis of a voluntary choice between life and death based on their relative attractiveness. When someone has more experience (certainty) with one option (reflected in the implicit association that life is not good for me) they may favor the more uncertain option, the active escape, a choice strategy relying on the FPC.

Taken together, the findings indicate that we are now beginning to find an answer to the question whether we know enough to effectively prevent suicide. Importantly, these findings provide an answer to a huge unmet need in suicide prevention: a specific target for psychological and neurobiological treatment approaches to reduce suicide risk. 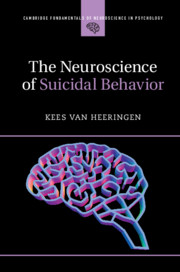 The Neuroscience of Suicidal Behavior by Kees van Heeringen

Reduced expression of GABA A receptor genes in FPC

Boorman et al 2009 How Green Is the Grass on the Other Side?

Zajkowski et al 2017 A casual role for right frontopolar cortex in directed, but not random, exploration

About the Author: Kees van Heeringen

Kees van Heeringen is a Professor of Psychiatry, Chair of the Department of Psychiatry and Medical Psychology, and Director of the Unit for Suicide Research at Ghent University, Belgium. He is also Co-founder of the Flemish Expertise Centre for Suicide Prevention. Professor van Heeringen's research has been awarded the Stengel Award by the Internat...