The Persistence of Reciprocity in International Humanitarian Law

Back in early May of this year, several news outlets in the United States reported that the Trump administration was in the process of pardoning several US service personnel accused and convicted of war crimes. Bryan Peeler investigates from a Humanitarian Law angle.

Back in early May of this year, several news outlets in the United States reported that the Trump administration was in the process of pardoning several US service personnel accused and convicted of war crimes. According to the New York Times, one such pardon was for Navy Seal Edward Gallagher. Gallagher is to stand trial on charges of shooting unarmed civilians and killing an enemy detainee while deployed in Iraq. President Trump was hoping to announce the pardon on May 27, 2019 – Memorial Day in the US.

With respect to its international humanitarian law (IHL) obligations, the Trump administration has sent mixed signals. During New Hampshire Republican Party presidential primary campaign debate, Mr. Trump promised that if he was elected president that he would authorize the use of interrogation techniques “…a hell of a lot worse than waterboarding.” When asked in a subsequent primary debate in Detroit how he would respond if officials refused to carry out such a policy, Trump responded: “They’re not going to refuse me – believe me…I’m a leader, I’ve always been a leader, I’ve never had any problem leading people. If I say, ‘do it,’ they’re going to do it.”

Shortly after becoming President, in an ABC television news Mr. Trump stated that though he would act on the advice of Secretary of Defence James Mattis – who himself opposed the use of torture – “…do I feel it (torture) works? Absolutely, I feel it works.” Yet in response to a New York Times story later that month citing the existence of a draft executive order intended to re-open so-called “black sites” where the CIA had tortured detainees, the Trump administration responded by releasing a different draft order which called for no such policy changes. 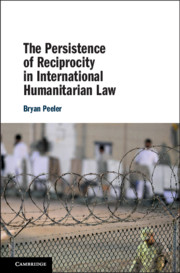 The Persistence of Reciprocity in International Humanitarian Law by Bryan Peeler

However, as I argue in The Persistence of Reciprocity in International Humanitarian Law, the legal position of the Bush administration towards its IHL obligations was different to the current administration’s. Bush officials never argued that IHL was inapplicable to the armed conflict with the Taliban and al Qaeda. Rather, they argued that – according to IHL – the detainees were not entitled to POW status.

While this may seem a like a distinction without a difference, it is important because it demonstrates how the Bush administration – unlike the Trump administration – took international law seriously. While Bush officials may have disagreed with the view that all Taliban and al Qaeda detainees were entitled to POW status despite their conduct, they still felt the need to make their justifications in terms of the law itself. As I show in the book, Secretary of Defence Donald Rumsfeld, Office of Legal Counsel lawyer John Yoo, and even the President himself cited the reciprocal provisions embedded in Geneva Convention III Relative to the Treatment of Prisoners of War in defending the US position on the detainees’ POW status.

The POW status of detainees is a sperate legal issue from that of torture. As a party to the Convention against Torture, the US accepts that the prohibition against torture is non-derogable. Indeed, the Convention establishes universal jurisdiction over the crime of torture. On the other hand, the POW status of detainees in an armed conflict is contingent on their compliance with IHL. You can deny a detainee the status of POW, but it does not follow that you can torture them.

About the Author: Bryan Peeler