Amy and I wrote Subsistence and Society: New Directions in Economic Archaeology, because the time was right to rethink the topic for two key reasons. Firstly, palaeoeconomics and environmental archaeology, which flourished from the 1950s to 80s, became quite unfashionable with the rise of post-processual critiques that accused it of ‘determinism’. However, like so many other critical reactions, the pendulum swung too far. Whilst some palaeoeconomic work had been unduly deterministic in nature and ignored social agency, reactionary post-processual work frequently threw the baby out with the bath water, creating a false dichotomy between the economic and cultural, leaving interpretations without a framework to understand the holistic basis upon which societies functioned. Environmental and economic reconstruction provide a strong frame of reference to contextualise the rich tapestry of human cultural variation as well was to set some boundaries of viability. So, one aim of the volume is to re-evaluate the approaches of economic archaeologists and to suggest how models can be best applied within a more rounded consideration of the past and, indeed, where determinism is sometimes still valid.

The second motivation for this volume was to integrate a raft of new scientific techniques. Many recent approaches, such as residue analysis, isotope science and archaeogenetics, largely developed as techniques with a degree of disconnect from archaeological theory and other lines of evidence. As such, the book also aims critically to evaluate these rich new strands of evidence, comparing and contrasting what they tell us in relation to longer-standing lines of evidence such as bones or seeds. All of these newer methods have huge potential and make really valuable contributions, but none make other lines of evidence redundant. If one wishes to know about populations, production, processing and consumption within the subsistence base, then multi-proxy approaches are essential. We also do a little future-scoping for the very latest developments and challenges within our field.

The reason that Amy and I came together to write this volume was because we had studied together for our master’s degrees in Environmental Archaeology and Palaeoeconomy at Sheffied in the mid 1990s. We came from the same academic stable, taught by some of the best in the palaeoeconomy school, but at a time when the approach was under increasing theoretical attack. Amy specialised methodologically in archaeobotany, whilst I focussed on zooarchaeology. Many new methods were in their infancy when we were taught, but both of us have gone on to work extensively with innovative science groups undertaking isotopic, genetic and geochemical investigations. Hopefully, our combined experiences of the last 20 years or so have led to some valuable insights into approaching subsistence and society in prehistory.

Who is the book for? In its entirety, it sets out an agenda and up-to-date approach to studying the role of subsistence economics in past human cultures that will be of value to academics and students specialising prehistory and biology-facing archaeological sciences. It is not a methods textbook, but nonetheless I hope individual chapters will make valuable readings for students. Chapter 1 is a broad historiography of the palaeoeconomic school, whilst the chapter 2 evaluates a wide range of economic models whilst scrutinising the concept of ‘determinism’. The chapters integrating new methods (stable isotopes, residue chemistry, archaeogenetics, phytoliths and starch grains) all provide a critical overviews of approaches in their wider context using worldwide examples. Our two case study chapters on Neolithic farming in Europe and pastoralism and horse domestication in Central Asia can also stand alone for those interested in those topics. Of course I’d like you to read it all, but it does also lend itself to seminar readings of individual chapters too, and each chapter is available electronically on Cambridge Core. 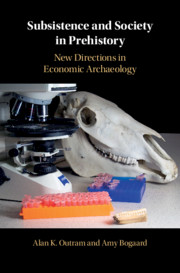 Subsistence and Society in Prehistory by Alan K. Outram and Amy Bogaard

About the Author: Alan Outram

About the Author: Amy Bogaard

Amy Bogaard is Professor of Neolithic and Bronze Age at the University of Oxford. She is a botanically inclined archaeologist who specialises in the study of ancient agroecology and its social ramifications by conducting archaeological fieldwork alongside the study of present-day farming systems. She is the current executive editor of World Archaeo...