I decided to write Women of Fortune when I discovered that Grace Bennet, widow of a rich mortgage and loan banker and mother of the Countess of Salisbury, had been murdered by the local butcher in 1694.  Called by a contemporary “the most sordid person who ever lived,” Grace was, however, not only a victim of shocking violence but also part of a story of international mercantile wealth and the world of the three generations of women who inherited it.  As a result, Women of Fortune provides a study of social and economic change in early modern England through the lens of the Bennet and Morewood families and their network of connections across city, country, and continent.

Two younger sons of parish gentry, Thomas Bennet (later Lord Mayor of  London), and Gilbert Morewood made their fortune in the international cloth trade and the East India Company in the late sixteenth and seventeenth century. Moving their capital into real estate, crown finance, and money lending, they also invested in large dowries to ensure that their daughters, daughter-in-law, and granddaughters married into the gentry, the baronetage, and the nobility.  Although historians have analyzed aristocratic marriages and the property transactions that underwrote them, the story of these mercantile heiresses has not been told. For over 150 years, these women used the merchant wealth they inherited to expand their fortune, to advance their families socially, and to develop the cultural capital necessary to underwrite new identities for themselves despite alleged limits on their property rights.

They bought and developed London and country property, insisted on their timber rights, lent money and, with the development of the stock market, purchased shares in the Bank of England, the East India Company, and the South Sea Company. At the same time, they pursued new scholarly and intellectual interests, following their curiosity where it led, to London, to Europe, and to political and religious dissent. With the drama of a miniseries, their individual identities were shaped by their own social and economic choices, litigation, religion, politics, scholarship, travel, and material culture.
Bennet women repeatedly used the law to secure their property rights by suing their husbands, sons, mothers, sisters and business associates. They also made prenuptial agreements and wills to ensure that their children –especially their daughters– inherited their capital and social position. Elizabeth Bennet, widow of Richard Bennet, an East Indies and Virginia Company merchant, inherited at least £20,000 and had many aristocratic suitors.  After marrying Sir Heneage Finch, the Speaker of the House of Commons in 1629, she protected her inheritance with a prenuptial agreement and bought her son Simon’s wardship for £4,000 from a Caroline courtier. Sir Heneage Finch bought Kensington House but died soon after. Elizabeth lived there for 30 years even during the Civil War and purchased additional property all of which became part of Kensington Palace. In her will Elizabeth left money to her daughters explicitly stating that their husbands should have no control over their inheritance.

Lady Finch’s son Simon Bennet became known as “Great Bennet” because of his inherited wealth and profitable mortgage and loan business. Although the Duke of Ormond sneered at a “defect of quality, ” Bennet’s large dowries for his three daughters brought them success on the marriage market. Elizabeth married Viscount Latimer, son of Lord Treasurer Danby, with a marriage portion of £10,000 but died in childbirth in her early twenties. As a result, her two sisters had even larger dowries of £20,000. Frances married the 4th Earl of Salisbury and Grace eloped with her cousin John Bennet.

Women of Fortune displays the identities these women created for themselves as cosmopolitan scholars, travelers, London consumers, and investors. Anne, Viscountess Conway became a philosopher, corresponded with Leibniz, and wrote a history of ancient and modern philosophy that discussed Hobbes and Spinoza. In her later years she became a Quaker despite the disapproval of her husband and other relatives. Her niece, Frances, Countess of Salisbury, after the murder of her mother and, a month later, the death of her husband oversaw the Salisbury estate. She tore down Salisbury House on the Strand and created Cecil Street with a new row of houses for prosperous tradesman. Then, combining her income as co-heiress of her father’s business with her dower, she left for Paris in 1699 to spend four years on the continent on the longest Grand Tour of any noble woman in the seventeenth century. Although felled by smallpox in Rome, her love of travel carried her to Venice, the south of France and the Low Countries despite the outbreak of war before she returned home in 1703. Once back in London and living in a handsome townhouse in Mayfair, she continued to run the Bennet business suing those who owed the firm money including her sister and brother-in-law.

Grace Bennet the younger had married her cousin, John Bennet, a Member of Parliament, who was sent to the Fleet for debt. Grace successfully sued him to prevent his repeatedly using her property as collateral for loans while in prison. She survived claims from his more than thirty creditors because her father had left his daughters’ fortune in a trust. Living now in Mayfair, Grace bought shares and loaned money to her elite friends. Grace left most of the Bennet fortune to the 6th Earl of Salisbury, her sister Frances’s grandson, and was buried in Westminster Abbey where her sister Elizabeth, Viscountess Latimer, had been buried years before.

Although Women of Fortune begins with murder it ends with a Bennet woman’s triumph over violence. Frances, Countess of Salisbury’s descendant, Lady Emily Anne Bennet Elizabeth Cecil, Marchioness of Westmeath, (1789-1858) daughter of the first Marquis of Salisbury, fought a series of lawsuits in the early nineteenth century for the right to divorce her husband, the violent Marquess of Westmeath.  Her case served as a model for new parliamentary statutes allowing women to gain custody of their children, obtain maintenance from their husbands, and to divorce. The book makes clear that Morewood and Bennet women from the 1620s to the 1820s repeatedly asserted their legal and economic rights and cultural independence despite legal impediments, a decaying system of coverture, and the patriarchal claims that upheld it. 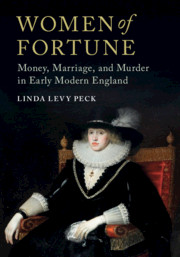 About the Author: Linda Levy Peck

Linda Levy Peck is a prizewinning historian who has published extensively on politics, society, and culture in early modern England. She is the author of Northampton: Patronage and Policy at the Court of James I (1982), Patronage and Corruption in Early Modern England (1993), which won the John Ben Snow prize awarded by the North American Conferenc...