Last month, the Australian government was the target of what commentators called an “unprecedented…broadside” at the United Nations’ Human Rights Council in Geneva. Responding to Australia’s delivery of a statement on the Kingdom’s human rights record, including the murder of journalist Jamal Khashoggi, the Saudi Arabian ambassador accused Australia of “horrific violations of human rights”, as well as “racist and extremist policies”.

Negative airings of Australia’s record on human rights at UN forums are, however, hardly ‘unprecedented’. As I demonstrate in Human Rights in Twentieth Century Australia, the nation’s domestic record has often been the target of international discussion and debate, fear of which has been one of the central drivers for domestic policy change. This ought not be surprising, given Australia’s history of deep engagement with the idea of human rights dating to the idea’s birth as a global norm in the 1940s.
Then, the nation’s governing Labor Party played an outsized role in negotiating the Universal Declaration of Human Rights as part of an eight-member drafting committee. Forged was a document which guaranteed personal liberties while offering a blueprint for the post-war welfare state, including rights to health care, education and work. Despite a fairly quick retreat from such leadership under a long period of conservative rule, ordinary Australians campaigning for Indigenous rights and political liberties in the 1950s, and then women’s liberation and the ending of conscription in the 1960s and 1970s reimagined and employed the term, even while its global significance ebbed and flowed.

This is one of the book’s key findings– that while the ‘new’ human rights scholarship is correct to highlight its “death from birth” in the early Cold War era, the term did not simply disappear until a dramatic re-emergence in the late 1970s. Instead, Australia serves as a useful case study in which to perceive the global career of rights, particularly as the term underwent a profound transformation during the high point of decolonisation and cultural revolution. The ‘human’ that the term spoke to expanded from its implied colonial origins to encompass not only Fanon’s “the wretched of the earth”, with whom Indigenous Australians in particular increasingly identified, but the struggles of women, LGBTIQ people and the disabled, to name but a few.
Rights have not only served progressive causes either. For while second wave feminists employed the term to challenge gender norms – demanding that men and women “become more human” – Catholics and other conservatives used the idea of inviolable humanity to challenge what they saw as the ‘permissive society’: and particularly demands for safe and free abortion. This is reflected today in attempts to legislate a Religious Discrimination Act in Commonwealth Parliament, despite the governing Liberal party’s long-standing opposition to a broader bill of rights, leaving Australia the only western nation to lack such a document.

While the term’s openness to conservative challenge – and the lack of any direct enforcement mechanisms for global ideas in a world of inviolable nation states – might seem disheartening, Human Rights in Twentieth-Century Australia shows that rights have had a “soft power” to change attitudes and policy. The power of “international opinion” – while often publicly brushed off by diplomats and politicians – sparked significant internal ire and introspection, contributing to the ending of official discrimination in Australia, and to the furthering of minority rights in general.
Today’s world of renewed class conflict, political disorder and ecological crisis poses profound questions for rights advocates. Whether these dilemmas necessitate a return to the broader redistributive rights agenda of the 1940s to complement the movement’s focus on individual liberty is one such challenge this book asks contemporary activists to ponder. What it does demonstrate, however, is that the language of rights is sufficiently malleable to form at least part of the answer. 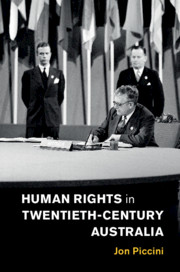 About the Author: Jon Piccini

Jon Piccini is a historian at the Australian Catholic University, Melbourne. He wrote Global Radicals: Transnational Protest, Australia and the 1960s (2016) which looks at Australian protest movements in the transnational 'Sixties' and edited a collection of essays entitled The Far Left in Australia since 1945 (2018)....