Written by: Christopher B. Balme 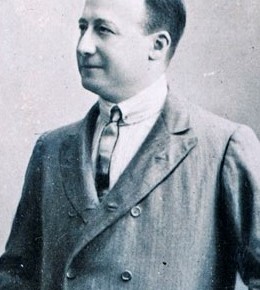 “It’s the network, stupid”, Maurice E. Bandmann (1872-1922) might have said, had he lived longer. Perhaps the greatest theatrical entrepreneur, nobody has ever heard of, Bandmann’s career is unique and unsung. Between 1895 and 1922 he created a theatrical circuit that extended from Gibraltar to Tokyo and included regular tours to the West Indies and South America. With headquarters in Calcutta and Cairo and companies listed on the Indian stock exchange, his operations represent a significant shift towards the globalization of theatre. His theatre reached places it had never been before and with a regularity that was new. This was transnational, flexible, highly mobile, tightly organized commercial theatre dependent on and responsive to culturally diverse and geographically dispersed publics.

This book is the first study of any kind devoted to this remarkable figure who took theatrical touring to a new level and extended it to all four corners of the globe except Australasia (it was said he would even take a company to the Antarctic if he could find an audience). An accomplished actor (he was born in New York, the son of two major Shakespearian actors, Daniel E. Bandmann and Millicent Bandmann-Palmer) and a minor playwright, his real innovation was to develop a rotation system for theatrical touring that depended on complex networks of support, transport and communication.

The book focuses on seven key areas: family networks; the business of theatrical touring; the politics of locality; repertoire and publics; an ethnography of itinerant acting; legal disputes and the provision of theatrical infrastructure. It employs network theory and methodology to elucidate the numerous interconnections between these different dimensions of Bandmann’s career. It draws also on substantial private and public archival material scattered across several countries. In particular, digitized historical newspapers provide almost the only reliable way to track a peripatetic entrepreneur who was continually on the move and communicated mainly by telegram.

Bandmann drew his productions and performers from London’s theatre industry, in particular the musical comedies of George Edwardes Gaiety Theatre, and, although his main ports of call were entrepôts of the British Empire, he also performed regularly before non-English-speaking audiences. The Bandmann Opera Company was hugely popular in Japan where he even performed overtly Orientalist works such as The Geisha and The Mousmé to great acclaim.

Bandmann died in 1922 in Gibraltar aged 49 on the eve of opening a new theatre there. In his time, he was a household name on the two dozen cities on his circuit.  Today Bandmann is mainly remembered in India where based his operations. In Kolkata he built the 1300-seat Empire Theatre (1908), now known as the Roxy Cinema, and in Mumbai the magnificent Royal Opera House (1912), which has just been restored to its original state as a heritage building. This book will hopefully contribute to a re-evaluation not just of his career but also of the figure of the theatrical manager and entrepreneur as innovators and modernizers. 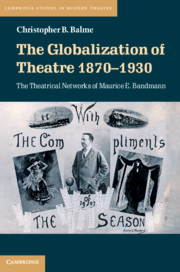 The Globalization of Theatre 1870–1930 by Christopher B. Balme

About the Author: Christopher B. Balme

Christopher B. Balme holds the chair in theatre studies at the Ludwig-Maximilians-Universität Munchen. His books include The Theatrical Public Sphere (Cambridge, 2014) and he is a senior co-editor of the six-volume Cultural History of Theatre (2017). He is principal investigator of the ERC project 'Developing Theatre'....