Is computing a boys’ field? Are men and women suited to different studies and careers? Are women innately uninterested in computing? Unfortunately, it’s not uncommon to hear these types of questions. But, we know the answer is a resounding NO! Yet, there are still fundamental questions about what’s happening to women in computing.

Cracking the Digital Ceiling: Women in Computing around the World is a global exploration of women in computing uncovering data, personal observations, similarities and differences, and the various obstacles and catalysts that influence women’s participation in computing from a wide range of countries and cultures. More importantly, we debunk many of the myths derived from western cultural thinking perpetuated to explain women’s low participation in computing.

Here are five common myths that cloud our perspectives, and why they’re not true.

Myth #1: The low participation of women in computing is universal

While women are seriously underrepresented in computing fields in the United States, Western Europe, and in most of the world, the situation is not universal. Consider, for example:

Myth #2: Men and women have different intellectual potential (for computing)

Some studies show that men and women are not as different as popular wisdom would have us believe. At the same time, neuroscience is showing us that many differences we believe to be innate are in fact culturally created. Thus we need to turn to cultural factors (such as opportunities, expectations, and advocacy), not innate potential, to see which factors contribute to women’s participation in computing.

Myth #3: Women ‘choose’ what they love, and it’s not computing

In the individualistic culture of the United States, we tend to assume we make our own choices and decisions. Many believe women simply do not choose to study computing, they choose subjects they love. But we need to consider the issue of “choice” in terms of cultural norms and expectations. When computing is perceived as a boys’ field, choosing to do computing can mean going against gender norms. This can have negative repercussions especially for many women in male dominated fields like computing.

Myth #4: Economically advanced countries are better at addressing the gender gap in computing

Studies have found that affluent, developed countries that feature highly in gender equality rankings are more likely to have the lowest participation of women in computing! The World Economic Forum ranked Scandinavian countries as the most equitable of societies, yet Norway, Finland, and Sweden have the largest gender gaps in college degrees in STEM fields. Meanwhile, Saudi Arabia has good representation of women in high school computing and yet very low ranking — 141 out of 144 — for gender parity.

Myth #5: Culture is too complicated to change

Yes, culture is complicated, but culture can change. An example of cultural change specific to computer science and gender has been studied at Carnegie Mellon University in the USA. Kicking Butt in Computer Science: Women in Computing at Carnegie Mellon University describes the changes in the microculture of the computer science department. As the culture and environment improved for all, the percentage of women rose from below 10% in the mid-late 1990’s to just under 50% from 2017 onward, and, what’s most important, men and women graduate at the virtually the same rate.

Let’s stop perpetuating western cultural myths about women’s low participation in computing once and for all. Instead, let’s commit to discussions that explore the wide range of obstacles and catalysts within our various cultures and environments. Addressing the gender gap requires a broader understanding of how we think about women and the computing field. And that’s no myth. 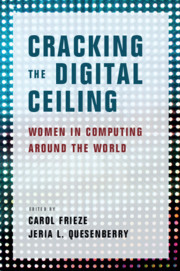 ‘Cracking the Digital Ceiling: Women in Computing Around the World’, Carol Frieze and Jeria L. Quesenberry

About the Author: Carol Frieze

Carol Frieze works on diversity and inclusion in Carnegie Mellon\'s School of Computer Science. She focuses on culture and broadening participation in computing. She is co-author of Kicking Butt in Computer Science: Women in Computing at Carnegie Mellon University (2015). Frieze is winner of the 2016 AccessComputing Capacity Building Award and the ...

About the Author: Jeria L. Quesenberry

Jeria L. Quesenberry is an associate teaching professor of information systems at Carnegie Mellon University. Her research interests include cultural influences on IT students and professionals, social inclusion, and broadening participation. She is co-author of Kicking Butt in Computer Science: Women in Computing at Carnegie Mellon University (201...