A History of Ancient Textile Production

© Photographic Archive of Modena Civic Museum of Archaeology and Ethnology.

The production of textiles is a very ancient human endeavour. In pre-industrial settings, it was a complex and time-consuming craft that must have engaged a large part of the population. The product was both vital to society and in high demand. Clearly, not only has textile production been a major economic activity throughout history, but it has also been a driving force behind the rise of political and economic empires!

The first traces of textiles, documented in Eurasia, date back to the seventh/sixth millennium BCE. These earliest examples of ancient cloth were made from vegetable fibres. Being fragile organic materials, textiles and fibres rarely survive in the archaeological record. Nevertheless, experts have found many creative ways to learn about how textiles were made and traded in prehistory. The reconstruction of ancient textile production is painstaking interdisciplinary work that  involves all kinds of archaeological evidence. The most important sources include:

There is nowhere where all of these puzzle pieces occur in the same location, and analogy and comparative studies are vital for areas where evidence is thin on the ground. Pioneering works such as those of Elisabeth Barber and John Killen opened the way to a modern archaeology of textile production, highlighting above all its essential interdisciplinary character. In recent decades, there has been an emphasis on archaeological reconstructions to reveal and illuminate the many aspects of ancient textile craft. Most recently, new scientific methods have demonstrated that it is even possible and worthwhile to explore ancient textiles at a molecular level, opening up entirely new frontiers that enable the investigation of the origin, quality and characteristics of the fibres. As a result, many new questions may be asked, and answered, using cutting-edge scientific methods.

The new volume Textile Revolution in Bronze Age Europe presents a variety of fresh approaches in the long-term study of history process. But why Bronze Age, and why Revolution? Within the textile craft world, the beginning of the Bronze Age witnesses the introduction of a new revolutionary fibre, namely wool. This innovation was to change the western Eurasian way of manufacturing textiles forever. The contributions making up the volume present a range of case studies to demonstrate that it is not only possible to achieve a deep understanding of the social, cultural, and economic impact of textile production in the past, but also the great potential that exists for addressing questions relating to ancient textile production and consumption when diverse perspectives come together.

The book aims to inspire a multi-disciplinary audience, both within and outside academia, inviting readers to look at this amazing craft and its dramatic role in history with new eyes. 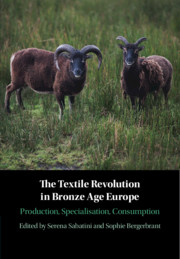 About the Author: Sophie Bergerbrant

Sophie Bergerbrant is Associate Professor in Archaeology at the Göteborgs Universitet, Sweden. Her main areas of research are the Early and Middle Bronze Age in Northern and Central Europe relating to textile archaeology, costume, mobility, gender, and embodiment....

About the Author: Serena Sabatini

Serena Sabatini is Associate Professor at the Göteborgs Universitet, Sweden and a scholar of Bronze Age trade and exchange networks in Europe and in the Mediterranean area. Her current research focuses on Bronze Age textile production and wool economy....