Why do you want to study India’s State-run Media

‘Why do you want to study India’s State-run Media?’ This question was frequently posed to me by my friends and fellow academics. For some broadcasting if not passé, is quite a mouthful, and hard to pronounce.

‘Why not study the increasing presence and uses of the internet, mobile phones, and associated digital media forms in India that you have written about in other locations in the Global South and the U.S’  was a common refrain.

I remained unconvinced by the questions, and, here are my two main motivations to research and write the book, India’s State-run Media: Broadcasting, Power, and Narrative.

First, I wanted to pursue a philosophical exploration into theory, media, and the postcolonial. I conduct my study within two intersecting levels, philosophical and theoretical, by analyzing broadcasting (telegraph, radio, television, some aspects of the internet) in colonial and postcolonial India. I adapt the method of ‘double hermeneutics’ to explore the genesis, history, and development of broadcasting. To this end, I draw on the respective elaborations of the ‘Hermeneutics of the Self/Subject’ by Paul Ricoeur and Michel Foucault, specific writings from neo-marxism, media, postcolonial, and feminism, and religious studies. An important argument of the book is that hermeneutics and philology should be understood as constituting global knowledge practice, a translational and transcultural enterprise, within which one could examine the plural and multifarious dimensions of media, culture, politics, traditions, etc.

Second, for me, India’s State-run Media has always been a puzzle, as to how, in what ways, radio and television were instituted in India, and the particular ways in which people encountered them. In the current scenario, where broadcast seems to be losing relevance and broadband on the ascendant with the rise of over-the-top streaming media, it is imperative that we understand how radio and television came to be, and the potential continuities and discontinuities between broadcast and broadband. Although there is a growing body of work on Indian media in general and television in particular, I felt that there is more to be explored and studied, hence this book.

While a few studies offered a potted overview of the formative history of broadcasting from the 1930s to the 1970s, several scholarly works examined ideologies of gender, nation, class, citizenship, Hindu nationalism, and soon, on pro-development, mythological, and other series that aired on Indian television in the mid-1980s, and recent writings have looked at the representations of nationalist imagination and globalization on state-run as well as private television in post–1990s, they have all ignored the spatiotemporalities of broadcasting, and the intertwined genealogies of sovereignty, public, religion that have underpinned the discourse of radio and television in late colonial and postcolonial period.

In addition, studies of television have glossed over the meanings, experiences, and practices of the religious in televisual narratives and viewers’ interpretations of television programs. In much of the literature, ‘religion’ is characterized as an ideology, a ‘false consciousness’, and a form of domination to be exposed, and situated in opposition to the ‘secular’—understood as an abstract, normative zone that is detached from the religious. I examine the symbolic and cultural discourses, power relations, repertoire of meanings, mediations of human actions, social events, and so on, in broadcasting and television programmes in late colonial and postcolonial India.

Researchers, scholars, media professionals, and graduate students interested in understanding the trajectory of media and broadcasting in colonial and postcolonial world, international and global contexts will find the book of interest.

My experience with Cambridge University Press has been fabulous!!! …the editorial team at the front-end, the production unit in the middle, and the marketing guys… all have been very diligent, thorough, and professional in the process of publishing this book. Indeed, it was an enjoyable experience. I’d like to express my sincere gratitude to the Cambridge University Team!!! 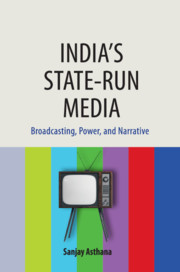 About the Author: Dr. Sanjay Asthana

Sanjay Asthana teaches at the School of Journalism and Strategic Media in Middle Tennessee State University. His areas of interest are media and cultural studies, postcolonial studies, visual communication, and international and global communication. He is the author of Youth Media Imaginaries from Around the World (2012), and has co-authored Pales...