Transcendence for an Age of Immanence: Re-Reading Romanticism and its Religious Thought

Written by: Alexander J. B. Hampton

The fundamental concern of Romanticism, which brought about its inception, determined its development, and set its end, was the need to create a new language for religion. One of the main motivations behind writing this study is to illustrate that early German Romanticism, the first of the Romantic movements, was more than a response to Kant and post-critical philosophy. Instead, this study illustrates that what was at stake for the members of the movement was something much larger, of which Kant was the most significant iteration in their day. This was the eclipse of a transcendent way of conceptualising reality that had been central to the West since Plato. Romanticism and the Re-Invention of Modern Religion explores how Early German Romanticism responded to the problems of its age by proposing a form of transcendence for an age of immanence.
Romantic religion was not, and could not, be a return to a halcyon theology of old. The Romantics embraced elements of Enlightenment thought and the developing natural sciences. However, they also saw the limitations of the individualism and empiricism at the centre of both of these developments. The increasing inability of modern immanent categories to transcend themselves, to extend beyond their own finite limitations, had brought about the crises conditions that captivated the attention of Germany at the turn to the nineteenth century. It was to these events that the Romantics sought to respond by developing a form of transcendence for an age that thought increasingly in terms of immanence.
This study examines the work of three major early German Romantics: Friedrich Schlegel, Friedrich von Hardenberg, and Friedrich Hölderlin. It also devotes significant time to explicating the essential intellectual background to their thought through examinations of Jacobi, Herder and Moritz. Further excursuses are made into the thought of Plato, Spinoza, and the early work of both Kant and Fichte.
What has hindered an understanding of Romantic religion in the past has been the problematic association of the movement with either Fichte or Spinoza. This study demonstrates that whilst the philosophical orientations represented by Spinoza and Fichte were fundamental to the development of Romanticism, it was the imaginative inspiration of the Platonic-Christian realist tradition that allowed Early German Romanticism to transcend the limitations of the two, whilst retaining elements of both.
It is through this third element that the often enigmatic, or seemingly fanciful claims of the Romantics, such as ‘all nature and all science should become art’ (Schlegel), or ‘the abstract should be made sense-like, and the sensible abstract’ (Novalis), become practicable philosophical claims. They are based on their active engagement with the philosophical notion of the participation central to the Platonic-Christian tradition. In the context of their own day, to engage this tradition, the Romantics turned neither to the language of philosophy nor theology, but to aesthetics which combined both.
In the thought of the Romantics, all reality came to be aestheticised within a framework wherein all creation had the potential to disclose the presence of the divine. Accordingly, the Romantic concept of religion was neither the assertion of an immanent form of secularised religion, nor was it an attempt to return to an orthodox theology of transcendence as it had been constructed in the past. Instead, this study offers a new understanding of Early German Romanticism through the claim that its central concern was to forge a new language for transcendence in an age that had come to think in terms of immanence. 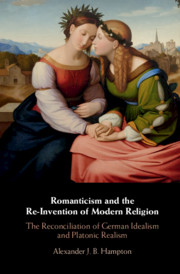 Romanticism and the Re-Invention of Modern Religion by Alexander J. B. Hampton

About the Author: Alexander J. B. Hampton

Alexander J. B. Hampton is Assistant Professor in Christianity at the University of Toronto. He specialises in the philosophy of religion and religious aesthetics, with his research considering the role of poetics and Platonism in the shaping of the Christian tradition....

Are We Slaves to Our Genes?

Are We Slaves to Our Genes?