Thomas Hardy and the Creative Process 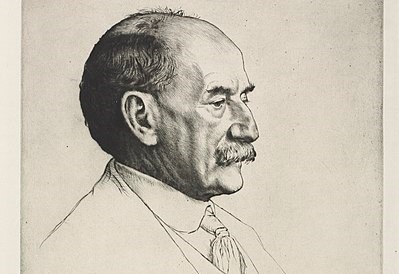 Thomas Hardy fully understood, from early on in his career, that the production of a novel, or short story, took place both in the realm of artistic creation and in the literary marketplace.  He eventually became very proficient at manipulating the requirements of Victorian publishing’s modes of production for his own purposes.  In particular the most common pattern, in which a novel was first serialized in a magazine, then published as a multiple-volume edition for the circulating libraries, and then published again as less expensive, single-volume versions, generated the opportunity for changes at each stage—and Hardy usually took advantage of those opportunities.

Hardy’s tendency to stretch, not to say break, Victorian proprieties in his selection of subject matter, and in his unconventional sympathies with ‘improper’ characters, meant that he often found himself in conflict with his editors and their commitment to nineteenth-century status-quo attitudes.  The bowdlerization insisted upon for magazine publication meant that Hardy viewed the alterations made for subsequent, first-edition volume publication as necessary to the truer realization of his art.

In 1894 Osgood, McIlvaine and Co., which had become Hardy’s publisher in 1891, finalized the arrangements necessary to print those works whose rights previously had been held by other publishing houses, and immediately began preparing the first collected edition of Hardy’s novels and stories.  The ‘Wessex Novels’ edition was published in sixteen volumes from 1895 to 1896, and consisted of thirteen novels plus three volumes of stories.  It represents an important point in Hardy’s oeuvre, not least because he used it to bring more into congruence the topography of those narratives written before his full achievement of the setting of Wessex from which the collection took its name.  Collected editions thus also offered Hardy the chance to advance his creative vision.

Osgood, McIlvaine had good reason to put the word ‘Wessex’ in its edition’s title, since the description of this landscape, and its buildings, customs, and characters, was increasingly seen as Hardy’s distinctive contribution to literature.  His retroactive efforts to bring all of his fiction into line with this perception elided the fact that the development of Wessex was piecemeal at best, at least until the publication of The Mayor of Casterbridge (1886), The Woodlanders (1887), and Wessex Tales (1888).  Unsurprisingly, then, when Hardy changed publishers yet again and decided to transfer his rights to the London firm of Macmillan and Company, the name chosen for its proposed collection of his works was simple and direct:  the Wessex Edition (1912-1914).

The Wessex Edition could claim to provide something very close to a comprehensive representation of Hardy’s literary accomplishment, and Macmillan had no hesitation in describing it as ‘definitive,’ a claim that Hardy endorsed in the ‘General Preface to the Novels and Poems’ that he prepared for the edition.    Yet there can be no doubt that the Wessex Edition had undergone a long process of publisher house-styling and accreted error that Hardy, despite his best efforts, was unable to address.

The Cambridge Edition of the Novels and Stories of Thomas Hardy adopts an early text model (usually providing the British first edition as copy-text) that allows its readers to trace, through each volume’s introduction and apparatus, the work’s textual evolution.  By giving modern readers the opportunity to encounter Hardy’s fiction as first experienced by his Victorian audience, and by tracing that fiction through the various stages of its evolution, we can observe the balance he struck between his aesthetic drive and the pragmatic realities of Victorian publishing.

Desperate Remedies, and other volumes in The Cambridge Edition of the Novels and Stories of Thomas Hardy, are available now. Enter code ‘HARDYS19‘ at checkout to receive 20% off all titles in the series through 31 December 2019.

About the Author: Richard Nemesvari

Richard Nemesvari is Professor of English and former Dean of Arts at Wilfrid Laurier University, Canada. He edited Thomas Hardy's novel The Trumpet-Major and Charlotte Brontë's Jane Eyre. He has written extensively on Victorian fiction, and his monograph Thomas Hardy, Sensationalism, and the Melodramatic Mode was published in 2011. He is a Vice-Pr...