Since the end of authoritarian rule under Suharto in 1998 Indonesia has experience two decades of law reform, which has had a huge effect on the courts. Melissa Crouch investigates these reforms below.

Indonesia’s extensive court system delivers justice for the world’s third largest democracy. The dramatic end of authoritarian rule under Suharto in 1998 ushered in two decades of law reform. Since then, the constitutional and political system has undergone major changes and legal reform. These innovations and reforms have also affected the courts, which have been restructured and imbued with new powers.

Indonesian courts have expanded in expertise, size and geography, with the introduction of a wide range of specialized courts. The contemporary judicial landscape features at least 13 different types of courts. These specialized courts often seek to disrupt existing concerns with the general court system, such as appointing a majority of non-career judges to the bench in an attempt to circumvent the cycles of corruption inherent in the career judiciary.

This emphasis on judicial reform, new courts and the trend towards judicial specialization is not unique to Indonesia and can be found around the world. Nevertheless, the Indonesian case is remarkable in the number and breadth of topics and areas of specialization.

The politics of Indonesia’s courts are the subject of sustained scholarly analysis by the late Professor Dan S Lev. His work is grounded in a socio-legal approach to the study of law, legal actors and legal institutions. In this volume, we seek to reinvigorate and affirm the importance of Lev’s work on the politics of courts and legal culture for the study of the judiciary in Indonesia.

There are at least three key aspects of specialised courts that contribute to their ‘specialised’ status: the subject matter or distinct jurisdiction of the court; a judicial selection process and judicial bench that often consists of a majority of non-career or ‘expert’ judges; and an investigation and determination procedure that differs from the general courts and is designed to be more efficient. 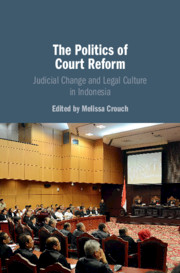 The Politics of Court Reform by Melissa Crouch

Specialised courts share common characteristics. Most specialized courts are creatures of legislation and are the legacy of the active role of the legislature in justice sector reform. This means that specialized courts are dependent on the goodwill of the legislature for not only the scope of their jurisdiction but also its very existence as an institution. This is with the exception of the Constitutional Court, Administrative Courts, Military Courts and the Religious Courts, which all have constitutional recognition.

Across these courts, chapters in this volume find common challenges such as the difficulty of establishing a new judicial institution; balancing career judges with non-career judges, and preventing and addressing corruption within the judiciary. It remains an ongoing struggle to break away from the decline in professionalism and rise in corruption so prevalent under the New Order, as so aptly described by Lev. In extending Lev’s work on courts in Indonesia, this volume collectively suggests that specialised courts often have unintended consequences and do not necessarily avoid the corruption inherent in the general court system.

About the Author: Melissa Crouch

Melissa Crouch is Associate Professor at the Law Faculty, the University of New South Wales, Sydney. She holds a B.A./LL.B. and Ph.D. from the University of Melbourne. She teaches and researches on law and religion, law and governance, and comparative constitutional law, with a focus in Southeast Asia. Her research has been funded by numerous award...