Why should one mind performances at court in Shakespeare’s time? Do we really need a book on the subject? So much has been written about the Elizabethan theatre industry’s connection with the public stage that we have invariably been led to focus on Shakespeare as a writer of public plays—perhaps because this makes him at once a much more accessible Playwright of the People, and so much more suited to our democratic ideals. What could be better than a gifted playwright spending his energy for the benefit and entertainment of the common people, rather than for the sophisticated elite? If mentioned at all, royal entertainment has been side-lined, often reduced to the performances of masques and even further narrowed to Inigo Jones and Ben Jonson’s celebration of the mysteries of state.

Yet Shakespeare was first and foremost a royal player, and his King’s Men were James I’s servants. Even plays that we do not usually associate with court performances—Othello, for example—may have been composed with a premiere performance at the king’ court in mind. For sure, Shakespeare was thoroughly acquainted with aristocratic entertainment, an oft-neglected aspect of his career which, when explored, offers fascinating insights into the cultural codes and artistic aspirations of the early modern period, as well as into the multimedia dimension of court shows, which included elaborate dances, lavish costumes, complicated stage machinery, eccentric props… and music. Oddly enough, little attention has been paid to this musical dimension, partly because, until recently, it has been difficult to establish what music was actually performed in those spectacles, since the scores were almost never published (contrary to the texts).

It is high time, then, that we think more carefully about Shakespeare’s involvement in royal entertainment. While several good reasons for this are explained in Performances at Court in the Age of Shakespeare, one is worth foregrounding here: in wonderful contrast to the since-destroyed public theatres, a number of the actual rooms where royal performances took place still exist. One can actually stand in them and try to imagine what they were like. And it’s likely to have been breath-taking: just consider items of a typical budget for one revel’s season—the 1611/1612 one, for example. Lighting was the most expensive, fuel second, followed by textile—more specifically curtains of taffeta and darnex (silk, worsted, or wool fabric made in Tournai) and painted cloths. The remaining 15% of the budget included furniture for the Revels Office. This must have made for a really grand spectacle.

Paradoxically, even lost plays can tell us more than we would think about the conditions of performances at court, as they are likely to offer us detailed information not only on James’s court, but also on Elizabeth’s: take Richard Edwards’s Palamon and Arcite. It was acted before Elizabeth I at Oxford on 2 and 4 September 1566 and, interestingly, it is described at length in three different accounts of the queen’s visit to the university as part of that summer’s progress, i.e. Miles Windsor’s Narrative, Nicholas Robinson’s ‘Of the Actes Done at Oxford’, and John Bereblock’s Commentary. A close analysis of these three texts shows that the physical presence of the queen gave added meaning to the play: a royal entertainment needed a royal audience to make sense.

True, many questions remain regarding our use of evidence and the various ways scholars are attempting to reconstruct court culture, whether the central issues are political, textual, or more pragmatic matters related to the way these events were staged. Performances at Court in the Age of Shakespeare brings these questions to the fore and hopes to offer several new and stimulating interpretive tracks. 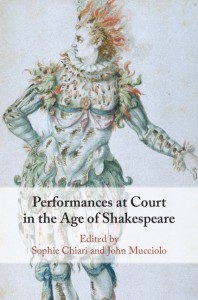 Pre-order your copy of Sophie Chiari & John Mucciolo’s forthcoming book, Performances at Court in the Age of Shakespeare, and enter code PCAS19 at checkout to receive 20% off your order, now through 31 December 2019.

About the Author: John Mucciolo

John Mucciolo is an Independent Scholar and founding editor, with W. R. Elton, of The Shakespearean International Yearbook. He is particularly interested in Shakespeare's late plays and early modern political, intellectual and theatrical backgrounds....

About the Author: Sophie Chiari

Sophie Chiari is Professor of Early Modern Studies at Clermont Auvergne University, France. She is the author of several monographs on Elizabethan drama, including Shakespeare's Representation of Weather, Climate, and Environment:The Early Modern 'Fated Sky' (2018)....