In our book Universal Semantic Syntax we provide an introduction into a unique theory of syntax, which is based on the idea that syntax is part of semantics. This theory takes a radical different approach to syntax from mainstream generative Chomskyan syntactic theory, and builds upon insights of syntax based on more than a century of thinking about syntax by various European scholars, especially the work of Otto Jespersen, culminating in the work of the Dutch linguist Carl Ebeling.

According to the semiotactic approach to syntax, language is a means of communication that works in the same way in different languages. In all languages the basic units of utterances are forms which have a particular meaning, and syntax deals with the relations between meanings. Furthermore, we find a limited set of universal syntactic relations that connect meanings. Other important concepts in semiotactics are the principle of compositionality and the difference between semantics (which deals with meanings of form-meaning elements) and pragmatics (which deals with interpretation of these meanings). Furthermore, a specific formalisation is designed, in which both semantic and syntactic relations can be shown at the same time, and such a formalisation can be provided for every part of grammar. In this way, every construction is shown to have a particular meaning and a particular syntactic arrangement, making it transparent how meanings interact with each other to form a combined constructional meaning.

The basic principles of the theory and the formalization are discussed in Part 1 of this book. In Part 2 we have provided an application of the theory, analysing a large number of example sentences from English and other European languages, and also various non-European languages. This application clearly illustrates that Semiotactics is a truly universal syntactic theory that can be successfully applied to any language. It shows how very different languages can be, yet at the same time reveals that the same syntactic patterns can be found cross-linguistically. The aim of this book is to introduce the theory of Semiotactics in an accessible way and to allow its readers to become familiar with the specific formalization of the theory. Therefore, in the Appendix B “How to construct a semiotactic formalisation”, a step-by-step guide is provided for constructing a semiotactic formalisation.

In our view, the analyses presented in this book show how fruitfully this semantic-syntactic approach can be applied to syntax, also in the case of very complex constructions. We feel that it is of vital importance that the study of syntax should shift its focus from the study of syntactic structure in isolation from semantics to the study of constructions as consisting of form-meaning units and their semantic-syntactic relations. With this work we hope to encourage linguists working with other languages to analyse various constructions in these languages by using the semiotactic approach, and to discover whether, and if so how, the theory could be further extended and if necessary adapted. Only by doing so we can gain more understanding of both language specific constructions and constructions from a cross-linguistic perspective. 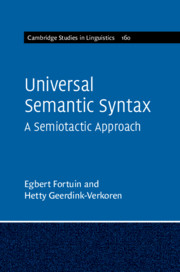 About the Author: Hetty Geerdink-Verkoren

Hetty Geerdink-Verkoren studied English and Japanese and completed her Ph.D. in Japanese linguistics at Universiteit Leiden. She is chief editor and content manager on a project for the compilation of a new Japanese-Dutch dictionary....

About the Author: Egbert Fortuin