Turkey between Democracy and Authoritarianism

Turkey has gone through radical changes since the year 1980, which was marked by a repressive military coup. Rising from the ashes of military authoritarianism in 1983, Turks sought to gradually democratize their polity through the 1980s and the 1990s. The post-coup transition was marked by the legacy of a long wave of urbanization, and economic development efforts by secular parties that failed to deliver adequate benefits in response to the pressures of globalization. An Islamically rooted political party’s promise to democratize the country and meet the conditions for joining the European Union in the early 2000s led to the emergence of an authoritarian one-man regime by 2017.

Our book tells the story of this historic transformation. We focus on the role of both structural factors and of political actors in global and domestic contexts to explain Turkey’s struggles with democracy and its recent descent into authoritarianism. Social scientists who explain the decline of democracies and the emergence of authoritarianism single out a few factors, ranging from economic to political and cultural. We argue that in the Turkish context, different factors were important in dismantling democratic institutions at different stages of decline. Rather than focusing on a single factor or dimension, we trace the influence of alternate variables that were critical at different stages of the incremental regime change in Turkey. We argue that the mutual distrust between secular and Islamic-rooted elites was crucial in prompting the turn towards authoritarianism. Economic factors played a key role in eroding the independence of the media. The weakness of the judiciary as an institution helped undermine the separation of powers. Coalitions between religious factions and later between religious and nationalist groups were crucial in deepening authoritarianism. Untruths, lies and manipulation played a role throughout the process. The struggle goes on. Turkey is now in the process of building new coalitions to democratize its institutions. 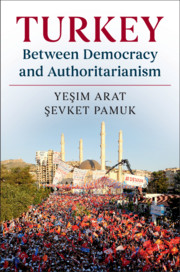 Turkey Between Democracy and Authoritarianism by Yeşim Arat , Şevket Pamuk

About the Author: Yeşim Arat

Yeşim Arat is Professor in the Department of Political Science and International Relations at Boğaziçi Üniversitesi, Istanbul. She is the author of The Patriarchal Paradox: Women Politicians in Turkey (1989), Rethinking Islam and Liberal Democracy: Islamist Women in Turkish Politics (2005), Violence against Women in Turkey (2007, with Ayşe Gü...

About the Author: Şevket Pamuk

Şevket Pamuk is Professor of Economics and Economic History at Boğaziçi Üniversitesi, Istanbul. He is the author of many books and journal articles on Ottoman, Middle East and European economic history, most recently of Uneven Centuries: Economic History of Turkey since 1820 (2018). He was Professor and Chair in Contemporary Turkish Studies at ...