After the clamour of the centenary of the ending of the First World War, how are we best to remember those who died in it? This was the question some were asking at the very first anniversary of the Armistice, and indeed at the Armistice itself. The many who had lost someone felt only the vacuity of any celebration of the end of the war. In Testament of Youth, Vera Brittain melds both her thoughts on that day and her later reflections: ‘All those with whom I had been really intimate were gone; not one remained to share the heights and the depths of my memories. As the years went by and youth departed and remembrance grew dim, a deeper and ever deeper darkness would cover the young men who would be my contemporaries.’
Roland Leighton, Brittain’s fiancé who was killed in December 1915, was one of the little recognised poets of the war, and we look at his poetry in the context of the correspondence with Brittain, and in the wider context of the poetry of the time, including Rupert Brooke’s famed Poems 1914. Leighton disliked them, as indeed did many other combatant poets – Ivor Gurney, Isaac Rosenberg, Charles Sorley – all of whom wrote rather differently about those who died (as opposed to Brooke’s sonorous and generalized ‘The Dead’). One of our intentions in The Remembered Dead: Poetry, Memory and the First World War is to show the many different ways in which the dead are being remembered in poetry, even in the very early stages of the war, and by non-combatants as well as combatants. The challenge this presented to the poet, in 1914-1918 and later, generated changes and experiments in language and form, as established poetic traditions of remembrance were found wanting. One of the foremost experimenters, who gazed unflinchingly on the dreadfully damaged bodies she nursed in that war, was Mary Borden, whose work we discuss prominently.
The First World War has resonated as a historical, social, and cultural event throughout the twentieth century, and we also consider the way this is reflected in the work of the poets of that century – Keith Douglas, Seamus Heaney, Ted Hughes. Coming into the twenty-first century, we look also at a different sort of artistic response, still involving poetry: Simon Patterson’s La Maison Forestière Wilfred Owen, a unique celebration of Owen’s poetry in an architectural re-imagining of the house in whose cellar Owen spent his last days. And one any visitor to France can now visit.
Brittain concludes her grief-stricken reflections at Armistice in 1918: ‘the dead were dead and would never return’. Nonetheless, they haunt our imagination, most notably through poetry. In 2019, with the centenary behind us, but still with a necessary debt of memory to pay, we should bethink ourselves how to remember in the most honest way. The Remembered Dead: Poetry, Memory and the First World War offers a contribution to that reflection. 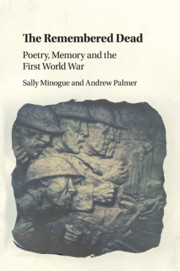 The Remembered Dead by Sally Minogue and Andrew Palmer

About the Author: Sally Minogue

Sally Minogue is a retired academic who is still writing. She has taught in both further and higher education. On retirement she was Principal Lecturer in English Literature at Canterbury Christ Church University. Her research interests have been eclectic, stretching from Philip Sidney's poetry to Alan Sillitoe's fiction. A common theme has been an...

About the Author: Andrew Palmer

Andrew Palmer is Principal Lecturer in Modern Literature at Canterbury Christ Church University, where he has taught since 1996. He holds a D.Phil. from the University of Sussex and is a Senior Fellow of the Higher Education Academy. His teaching and research are focused on the literature of the twentieth century. With Sally Minogue, he has publish...