When I started writing Utopia and the Contemporary British Novel ten years ago, I could not have foreseen how relevant many of the book’s core concerns would become. Reeling from the global financial crisis, in 2009 we had not yet experienced the Occupy! Movement, the European migrants’ crisis, the 2016 Brexit referendum, the election of Donald Trump to the White House, or the direct action of Extinction Rebellion. Back then I was writing about a group of British novelists whose formal innovations, it seemed to me, grasped at something possible that glinted just beneath the surface of mimetic realism, with its responsibility to depict lived ordinary reality. These writers were clearly in conversation with the idea of utopia – sometimes referencing it directly, sometimes hinting obliquely at better possible worlds that manifest in moments of temporal alterity.
As I conducted the research necessary to developing a suitable utopian method for disambiguating the complex narratorial strategies in these texts, the political background to the project became more pressing. In 2011, whilst participating in a conference on the Western Marxist philosopher and utopian thinker Herbert Marcuse, I chatted with scholars who remembered the electric sense of possibility on the streets of Paris in May 1968 and suggested that the global protests and tent cities that had sprung up in 2011 reflected a cleaving of the historico-political axis not seen since 1968. We marched with Angela Davis to Occupy Philly (an experience I won’t forget) and returning to London and walking around the Occupy LSX camp on the cobbled stones surrounding St Paul’s Cathedral it struck me forcefully that the abstract philosophical ideas I was working with – about utopia, time, and historical possibility – had prepared me for a moment in which the political landscape was unquestionably changing.
Twenty-first-century literary studies is a vibrant field and there are numerous emergent methodologies grappling with the contours of this changed, and changing, political landscape. Questions of utopia and its viability as a prefigurative mode of anticipation have become even more urgent than when I started writing Utopia and the Contemporary British Novel. In the direct action of climate change protestors and the discourse of young people today, whose lives will not be the same as their parents’ and whose feelings about neoliberal capitalism are far less sanguine, the sense of hope, despair, and utopian critique is palpable. I started writing this book because I believed that we needed to refine a literary critical method that could uncover utopian possibility within contemporary narratives (beyond the speculative tradition of science fictional utopias) and this conviction grew stronger as the political context around me became more urgent, more confused, and more divisive.
Utopia and the Contemporary British Novel is an academic book about methods of reading. It seeks to understand the proliferating timescales operating within contemporary novels by writers including Jim Crace, Maggie Gee, Ali Smith, David Mitchell, Hari Kunzru, Joanna Kavenna, Grace McCleen, Jon McGregor, and Claire Fuller. The experimental narrative strategies used by these writers suggest a shared preoccupation with examining the lived experience of time and its bewilderingly non-linear forms to produce narratives of futurity, apocalypse, transmigration, and haunting. As works of fiction these novels can therefore dramatise the experience of time – at both the individual and the collective levels – in a way that political theory and philosophical discourse cannot. The temporal disjointedness that marks our experience of the twenty-first century has given rise to different expressions of the unevenness of the contemporary, at the level of novelistic structure, prose style, generic sampling, and non-mimetic interventions into otherwise realist narratives. This is what I call non-contemporaneity. I developed this philosophical category through an extended reflection on the utopian writings of Ernst Bloch – a fascinating and obscure figure from German Marxist philosophy whose works are rarely read today outside of the interdisciplinary field of utopian studies. Bloch’s commitment to excavating the utopian impulse even in the unlikeliest of places spoke to me in a direct, compelling manner. His eccentric recasting of Jewish messianic thinking in line with Marxist materialist critique and avant-garde Expressionist method struck me as a powerful way of apprehending a temporal experience that shimmers between presence and absence – the utopian “something’s missing” that occupies a spectral ontology – and naming those times that are both now and also not now, in which futural hopes are alive, alongside redeemed past struggles, and in which time itself bends to produce new subjectivities and new collective encounters.
Non-contemporaneity offers us an explicitly utopian philosophical frame through which to understand the multiple, overlapping and contradictory time signatures that clash and coalesce within the present moment, and which the fictions under discussion in Utopia and the Contemporary British Novel eloquently depict. As I hope the book demonstrates, a utopian reading can help us to parse complex narrative temporalities that gesture towards a post-anthropocentric perspective that steps outside of ordinal time and into an experimental time of utopian possibility – whether miraculous, post-secular, apocalyptic, or cosmic. In imagining a rich variety of alternative timescales to contemporary capitalism, such novels help us to articulate the desire that something other, something better, can be realised. 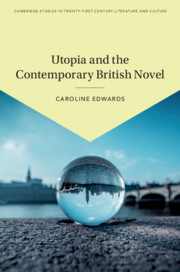 Utopia and the Contemporary British Novel by Caroline Edwards

About the Author: Caroline Edwards

Caroline Edwards is Senior Lecturer in Modern and Contemporary Literature at Birkbeck, University of London. Her work on living writers has led to two co-edited books: China Miéville: Critical Essays (2015) and Maggie Gee: Critical Essays (2015). Caroline has published in a number of journals, including Telos, Modern Fiction Studies, Textual Pract...