Reading Ted Hughes as an American

Like most Americans, I encountered Sylvia Plath’s poetry before that of her husband, Ted Hughes, and I approached his work with some reluctance – as only seemed natural, considering his customary relegation to the role of villain in the story of Plath’s tragedy. I myself was a student and would-be poet at large in the UK when I read my first Ted Hughes poem, hit upon in the middle of a randomly-opened Collected Poems at a bookstore in Edinburgh. The poem was “Ravens,” and its unflinching depiction of a disembowelled lamb and a three-year-old child trying to understand put me immediately in mind of Robert Frost: the world-wisdom, the mingled hope and melancholy, the sensitivity to seasonal renewal, the metaphysical halo which seems to hang over the scene.

I continued to consider Hughes alongside Frost, and all the other poets and writers whose work I adored as a New Englander: Wallace Stevens and Emily Dickinson in particular, two writers who, like Hughes, are frequently eager to look beyond the earthiness of a subject towards its metaphysical significance, its potential as a source of transcendental revelation. Emerson and Thoreau, with their studied individualism continually turning toward nature, made equally compelling brain-fellows for Hughes.

I began to read up on Hughes criticism, and found a world dominated by characters like Robert Graves and Carl Jung, and visionary British poets like Coleridge and Blake, all presided over by the immense presence of William Shakespeare. These were Hughes’s pantheon. And while there was no disagreeing with their importance, I persisted, if only for the sake of my own pleasure, in thinking of Hughes as a misplaced New Englander, a writer more suited to rhapsodising over stone walls and wringing revelation from birdsong than concocting Blakeian national myths.

So when I came to write Ted Hughes and Christianity, although my main business was a serious theological reassessment of Hughes’s work, I was determined to keep up my Yankee-heavy contextualization, setting up Hughes for my readers as I myself had encountered him. And he meets me at least half way in this, in a variety of ways – for instance, by scattering his poetry and correspondence with surprising intertextual pings to Stevens, whose influence on Plath he pretty clearly resented. One of my favorite examples of this concerns Stevens’s “Thinking of a Relation Between the Images of Metaphors,” which features a preternaturally sensitive bass fisherman:

“In the one ear of the fisherman, who is all

One ear, the wood-doves are singing a single song.

[…] The fisherman is all

One eye, in which the dove resembles a dove”.

We also find this in Stevens’s “Adagia,” first published in 1957 in Opus Posthumous: “Values other than those merely of the eye and ear.” The 27-year-old Hughes, up to his ears in his wife’s enthusiasm for Stevens, writes from America to a friend that same year, “Obviously, I think, people like Wallace Stevens house their demon where the eye-nerve enters – so that everything is arbitrary & colourful & partial & questionable. Whereas Wyatt & Crowe-Ransome [sic] house theirs where the ear enters – so that in them everything is inevitable & final & bottomless & unquestionable as the response of glands or the harmony of moving muscles.” Hughes adapts Stevens’s eye/ear discourse and turns it, as best he can, into an insult against the lawyer-poet – and in doing so, he commences his own fascination with fishing as a subject for poetry, with his first and arguably greatest fishing poem, “Pike,” written later that year, whose vivid nightfishing finale arrives “frail on my ear.”

Meanwhile, literary tourists to the Bay Sate can turn to Birthday Letters to read about a fishing trip off Chatham, a rabid bat on Boston Common, and a nightmarish encounter in Childs Park, Northampton. There’s no point denying the appeal of this sort of thing: of reading about personally meaningful places in the work of a writer you enjoy. This risks sounding unliterary, and perhaps it is. Certainly, it is. The story of Plath and Hughes pulls us, despite ourselves and without our quite being aware of it, away from pure, disinterested scholarship, toward something murkier, and more human. But, speaking only for myself, this wilful absorption of Ted Hughes, whose poetry works so hard to make the natural world present to us, into my own life – the poets I read, the places I love – continues to make perfect sense.

Ted Hughes is, for me and I hope for those who pick up my book, much less a shamanistic Royalist, a man out of time, than an alert and engaged participant in all the transatlantic currents of the twentieth century 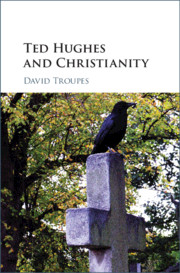 About the Author: David Troupes

David Troupes completed his Ph.D. at the University of Sheffield in 2018. His writing on Ted Hughes has appeared in Religion and Literature, The Ted Hughes Society Journal and PN Review, as well as in critical anthologies from Cambridge. He is on the Council of the Ted Hughes Society. He has also published two full collections of poetry, and a sele...