Of bias and frames: Forgotten episodes and mechanisms of transitional justice

A study published in the journal Animal Behaviour in 2017 found a bias in favour of researching vertebrate animals to the detriment of invertebrate species across a wide range of biological disciplines. Despite only accounting for 7% of all animal species, vertebrates’ studies made up 70% of all papers published in Animal Behaviour.  My book Justice Framed: A Genealogy of Transitional Justice reveals a similar bias within the field of transitional justice where certain types of human rights violations and certain institutional responses to them are privileged while others are neglected.

Transitional justice emerged over the last three decades influenced by four formative events: the transitions to democracy in Argentina and the rest of Latin America in the 1980s, the collapse of communism in Europe in 1989-91, the reinvigoration of international criminal justice from 1993 and the establishment of the paradigmatic South African Truth and Reconciliation Commission in 1995. The discourse of transitional justice inherited a series of characteristics from these events that shaped its emergence, including a focus on civil and political rights, a comparative method and a preference for legalistic and state-centric policies.

The influence of these formative events meant that the discourse of transitional justice only recognises as valid those situations of human rights violations and mechanisms implemented to address them that reflect these inherited characteristics. In contrast, those situations, in the past and the present, which do not fit this mould and those mechanisms that foreground socioeconomic rights, reject legalism or marginalise the state are not taken into account. 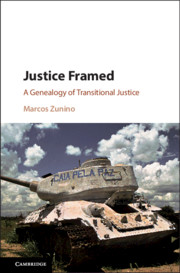 As a result of this bias rooted in the process of emergence of the discourse of transitional justice, a series of momentous historical events involving responses to widespread violations of human rights have been left out of the narrative. These include the process of decolonisation, Cold War proxy wars and transitions towards non-liberal regimes. The responses implemented in these contexts, such as redistributive economic policies and experiments in civil society and popular adjudication, have been thus excluded from the canon of transitional justice mechanisms because they did not reflect the discourse’s characteristics.

A similar framing process has occurred within those historical events actually included in the history of transitional justice. For example, among the initiatives carried out to respond to World War II, those that are legalistic, state-centric and concentrate on civil and economic rights, such as the Nuremberg International Military Tribunal, are privileged to the detriment of socioeconomic measures, such as efforts directed at reforming the German economy blamed for the war or initiatives that disregarded legalism such as instances of people taking justice in their own hands.

The filtering out of episodes and initiatives that do not reflect the characteristics of the discourse of transitional justice is not confined to the past. This bias has been encoded inadvertently in transitional justice from its emergence and continues to influence how contemporary situations of human rights violations are approached and what initiatives of redress are contemplated, recommended and ultimately adopted. Being aware of this ingrained bias can help to explore other possibilities of justice and redress beyond the constraints of the existing framework of transitional justice.

About the Author: Marcos Zunino

Marcos Zunino is Research Fellow in Judicial Independence and Constitutional Transitions at the British Institute of International and Comparative Law. He has previously worked for the United Nations, international non-governmental organisations and the Argentine judiciary. He served as a Legal Officer at the Extraordinary Chambers in the Courts of...