This book’s gestation began many years ago in the reading room of the Huntington Library. I spent a week leafing through play manuscripts from the 1790s, trying to figure out how censorship worked. As I skimmed, I couldn’t help but notice the remarkable number of plays which featured a Stage Irishman and/or Irishwoman. I was aware of the stock figure, but not of its apparent ubiquity in late eighteenth-century comedies: Blunder O’Whack, Teddy O’Credulous, Phelim Delaney Mulvaney Kilruddery, and a veritable slew of Norahs and Bridgets were everywhere I looked. The final straw came when I encountered Teddy O’Shaughnessy – while I was aware my surname caused non-Irish Anglophones pronunciation difficulty (and as for the spelling….), it was entirely news to me that it was sufficiently infused with Paddywhackery to have been registered as an eighteenth-century comedy name! What seemed most extraordinary to me then was that so many of these plays were authored by Irish writers. It seemed like colonial cringe of the most egregious kind. But it sparked in me an interest in the diasporic dramatic condition and the difficulty in marrying patriotic tendencies to the commercial imperatives demanded by the London theatrical audience.
Over the subsequent years, I became increasingly interested in these Irish writers of the eighteenth century, a period notable for the impressive number of Irish playwrights and actors that were then operating in London. Names such as Richard Steele, Oliver Goldsmith, Arthur Murphy and Richard Brinsley Sheridan are widely known, yet they are not always recognised as being Irish and, even when acknowledged as such, the implications of their nationality and cultural formation tend to be downplayed in the critical literature. Moreover, they represent only a fraction of the remarkable number of Irish who made their careers in the theatres of England, especially those in London: Irish men and women from various socioeconomic and religious backgrounds made names for themselves as actors, playwrights, theatre managers and theatre critics, and thus formed an integral part of the human infrastructure of the eighteenth-century theatrical world.
All of this activity took place at a period of fraught Anglo-Irish relations (plus ça change). Irish patriotism, galvanized by figures such as Robert Molesworth and Jonathan Swift, became more insistent both in Dublin and London. The Jacobite Rebellion in 1745 saw the Scots supplant the Irish as the Celtic bogeymen of the English imagination, and Irish troops proved essential to the global Seven Years’ War. A growing body of revisionist historiography emerged which offered a new perspective on the origins of Ireland and its people, quietly pointing to the cultured and politically sophisticated society that existed before the disruptive effects of invasion and colonization.
The essays in this volume explore the extent to which the concentrated Irish theatrical activity of the eighteenth century, placed in this context of growing patriot confidence and increased British tolerance, might be construed as a distinctive facet of the Irish Enlightenment. As the continuing presence of Teddy O’Credulous and his pals on the London stage testifies, it was hardly a perfect Enlightenment, but these essays collectively demonstrate that the theatre was a significant institution for the representation of Irish civility to our British neighbours. 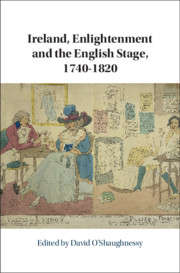 Ireland, Enlightenment and the English Stage, 1740-1820 by David O’Shaughnessy

About the Author: David O'Shaughnessy

David O'Shaughnessy is Associate Professor of English at Trinity College Dublin. He has published widely on eighteenth-century theatre studies, including William Godwin and the Theatre (2010). Most recently, he edited 'Networks of Aspiration: The London Irish of the Eighteenth Century' which was a special issue of the journal Eighteenth-Century Lif...