Decadence and Literature is a volume in the Cambridge Critical Concepts series whose larger purpose is not only to show how certain key terms in literary studies have originated and developed in the past but also to demonstrate how new applications of those terms can lead to original critical insights in the twenty-first century. ‘Decadence’ had a long history as a term connoting both moral opprobrium and aesthetic inferiority before the nineteenth-century critic Théophile Gautier began to use décadent to describe the style of Charles Baudelaire in a positive sense as one suited to an age of perceived political and social decline. This perception was fueled by a largely reactionary attitude toward the inexorable rise of modernity in all its forms: industrial production, capitalist economics, democratic politics, urban renovation, and, above all, bourgeois society.
Much of the richness of decadence derives from the fact that the concept seems to be both genus and species. Yes, there are various movements and trends in the late nineteenth century—French décadisme, Italian decadentismo, British Decadence, and so on—but these various forms of decadence are just that: forms of decadence, the genus that makes the various species possible. ‘Aestheticism’ is another of these species, a branching off from the main phylum, and so, it seems, is ‘fin de siècle’, a period label that includes not only a sense of historical decline but also the idea of societal unravelling. In addition to the fin de siècle—the end of the nineteenth century—the genus is identifiable in further cultural environments at other times (both ancient and contemporary) and can be analyzed using the methodologies of disciplines other than the literary—whether historical, art historical, sociological, philosophical, theological, geographical, or otherwise—for the purpose of illuminating literary expression.
Our collection therefore presents approaches to decadence by leading scholars in multiple fields that reveal the range and complexity of the concept as it developed over the centuries, beginning with ancient Rome, discussion of which forms the ‘Origins’ section of the book. The section also includes analysis of the libertine Enlightenment in the eighteenth century and the critique of liberal modernity in the nineteenth century as part of the origin story that leads to decadence today.
The ‘Developments’ section of the collection shows the conceptual relationship of the literature of decadence to several intellectual fields that were only just emerging in the late nineteenth century, such as psychology and sociology, as well as to older, more established disciplines that were profoundly affected by the encounter with decadence—art history, philosophy, theology, and science. Toward the end of the nineteenth century, almost any departure from artistic tradition or bourgeois normality invited the hostile judgment of decadence, so female writers in particular were put in a position of double jeopardy for violating both artistic and social norms. These New Women were often grouped with the decadents by apologists for those norms, even as the work of those same New Women often makes the male decadent an object of feminist parody and satire.
After decadence developed through various established disciplines in the nineteenth century, the concept takes a number of new directions in the twentieth century. In the ‘Applications’ section our authors show how decadence provides a rich social and aesthetic context for the analysis of different genres, media, periods, and even entire societies—such as Vienna during the twilight of the Austro-Hungarian Empire and Berlin in the Weimar Republic. The collection closes with an analysis of recent pop-culture manifestations of decadence and reaches the conclusion that the concept, once a kind of moral shorthand used to condemn innovative art and unconventional behaviour, has today assumed some surprisingly progressive connotations: ‘The just society that progressives desire is hardly on the horizon, but the ever-paradoxical concept of decadence can be invoked as a way of recognizing its arrival, because the just society will finally exist only when the need to designate another human being as “decadent” does not’. 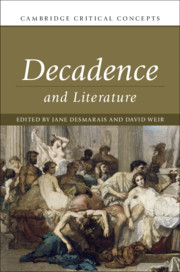 Decadence and Literature by Jane Desmarais and David Weir

About the Author: David Weir

David Weir is Professor Emeritus of Comparative Literature at The Cooper Union for the Advancement of Science and Art in New York City, where he taught literature, linguistics, and cinema. He has published books on Jean Vigo, James Joyce, William Blake, orientalism, and anarchism, as well as three books on decadence. Those books have had a major ro...

About the Author: Jane Desmarais

Jane Desmarais is Professor of English and Director of the Decadence Research Unit in the Department of English and Comparative Literature at Goldsmiths, University of London. She has written numerous essays on the theme of decadence and has co-edited several works, including Decadence: An Annotated Anthology (with Chris Baldick, 2012), Arthur Symo...