WHAT IF HUMAN WORK ON RELIGION IS JUST GETTING STARTED?

Gather everything that we humans, religious and nonreligious, have ever done to satisfy ourselves about transcendent things under this label: the religion project. Then ask yourself whether the effort has reached maturity. In Religion After Science, I argue that the correct answer is No. The religion project is instead hugely underdeveloped. Take what religious practices have contributed to the effort. This often comes in for virulent criticism, leading to the suggestion that religion should give way to science. But when viewed from the perspective of evolution and deep time – the macro-level perspective that science itself makes available – both religion’s clear shortcomings and irreligion’s hopes for its demise can be seen to be so many signals that the religion project has been held back and is still immature.

What if all this is true? In Religion After Science I argue that the consequences are surprisingly large. Influenced by a false sense of our maturity, most people think either that the existence and nature of a transcendent reality have already been made manifest or that there is no such reality: religion is viewed either as a success or as a failure. But if the religion project is immature then it’s too early for either evaluation. The evaluation ‘immature’ replaces both ‘success’ and ‘failure.’ To see what religion can be, we will need to fix its many manifest shortcomings and also make room for the contributions of possible future people with greater religious capacities than our own.

The immaturity view, indeed, has transformative consequences for a variety of positions that have helped shape our culture. Consider scientific naturalism, the claim that the realm of nature explored by science is all there is. Though we gain no reason to say that naturalism is false, we will now reasonably ask it to relax its grip on our culture. If views about transcendence might well be true then naturalism might well be false. Take also a view I call believerism, according to which religious practice by its very nature requires believing detailed propositions about God or Christ or the Buddha-nature or karma. It’s never a good idea to regard what’s true of something in an immature state as destined to remain. When instead we think hard about how to be religious while in an immature condition and trying to grow, what emerges are forms of religion focused on transcendence but without belief. Consider also secular humanism, which says we should leave thoughts of transcendence aside, focusing rather on the dignity and needs of human life and its long-term potential. If the religion project is immature, then we will reasonably stay open to some form of religion adapted to immaturity itself being a big help as humans navigate the big challenges ahead. Then religious humanisms may be found working alongside secular.

A final consequence is the largest of all, and subsumes the others. If the religion project is immature, then because of the potential benefits, both intellectual and practical, including a further humanizing of humanity, we should want to develop this effort much more fully and impressively. We should want to give to the religion project the dedicated sort of attention that science as a human project has already received. In matters of religion we’ve lagged behind. But we can now make up for that. Religion can and should be the next major item on the Homo sapiens agenda. 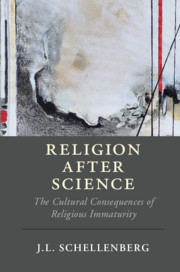 About the Author: J. L. Schellenberg

J. L. Schellenberg is Professor of Philosophy at Mount Saint Vincent University, Nova Scotia. His work was honored by a special issue of the Cambridge journal Religious Studies in 2013....