Revolutions in the contemporary world

There are two main ways of approaching the study of revolution in the contemporary world – and they are both wrong.  On the one hand, revolutions are everywhere: on the streets of Kobane, Caracas, and Khartoum; in the rhetoric of groups like Extinction Rebellion and Black Lives Matter; and in the potential of new technologies to reshape people’s lives. In recent years, figures as varied as Abu Bakr al-Baghdadi, Emmanuel Macron, Tarana Burke, Xi Jinping, Tawakkol Karman, and Elon Musk have been labelled as revolutionaries, while the hugely popular musical Hamilton, and the even more popular Star War series, have eulogised revolutionary struggle.

On the other hand, some argue that revolutions are irrelevant to a world in which the big issues of governance and economic development have been settled. With the passing of state socialism in the Soviet Union, it is supposed, revolutions appear more as minor disturbances than as projects of deep confrontation and systemic transformation. What is left, for good or for bad, are pale imitations: anaemic (small ‘r’) revolutions rather than ‘real’, ‘proper’, ‘authentic’ (big ‘R’) Revolution.

Both of these positions are untenable. While the former makes revolution so all-encompassing that it becomes an empty term without substantive content, the latter fails to see the enduring appeal of attempts to overturn existing conditions and generate alternative social orders. If we are to generate a more judicious appreciation of the place of revolution in the contemporary world, we need to examine the multiple pathways – or anatomies – that revolutionary processes take.

This task begins with the notion that revolutions are not static objects of analysis, but processes that change in form across time and place. Revolutions have been conducted by nationalists in Algeria and Angola, slaves in Haiti, constitutionalists in America and France, communists in Russia, China, Nicaragua, and Afghanistan, radical military groups in Libya and Ethiopia, peasants in Mexico, Cuba, and Vietnam, a curious coalition of leftists, students, merchants, and clergy in Iran, and an even curiouser mix of Islamists, youth, labour organizations, and ‘ultra’ football fans in Egypt. Revolutions are shapeshifters that modify their form according to the context in which they take place and through the actions of those who conduct them.

But that’s only part of the story. Exploring the multiple forms that revolution takes shows that there are regularities within revolutionary dynamics: when they emerge, how they develop, and how they end. In their most basic sense, revolutions involve the reorganization of everyday life – they seek permanent shifts rather than temporary changes to the texture of social relations. Revolutions consist of several dimensions simultaneously: a symbolic revolution that seeks to destroy pre-revolutionary tropes and reforge new forms of symbolic order; a political revolution that aims to overthrow the old regime and reconstruct systems of governance; and an economic revolution that intends to recast relations of production, value, and exchange. Revolutions are collective mobilizations that attempt to quickly and forcibly overthrow an existing regime in order to transform political, economic, and symbolic relations.

This underlying thread allows us to explore – and compare – a range of revolutions, from the Atlantic Revolutions of the late 18th and early 19th centuries to recent uprisings in Syria, Sudan, Algeria, and elsewhere. No two revolutions are exactly the same. But there is rhyme to the revolutionary unreason. And if the secret of the endurance of revolution as a practice is its adaptability, then students of revolution must be alive to this adaptability, combining a respect for the singularity of revolutionary experiences with the capacity to draw patterns in history. That way, we will cut a swathe through the great myth of revolution in the contemporary world – the idea that revolution can simultaneously be both everywhere and nowhere. 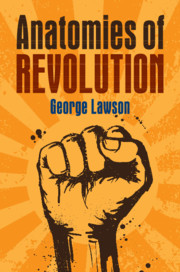 Anatomies of Revolution by George Lawson

About the Author: George Lawson

George Lawson is Associate Professor in International Relations at the London School of Economics and Political Science. His books include: Global Historical Sociology, co-edited with Julian Go (Cambridge, 2017); The Global Transformation: History, Modernity and the Making of International Relations, co-authored with Barry Buzan (Cambridge, 2015); ...