Literature, Value, and the Market

In a much-discussed recent article for Critical Inquiry, Michael W. Clune identifies contemporary literary culture’s most pressing challenge: that of the market. The dominant ideology of the past four decades – neoliberalism – denies “the existence of any value that can’t be registered by the market,” and the literary field has been as subject to this law as any other. In this context, it becomes difficult to make the case that certain “forms of life and objects of attention” – such as complex literary texts – are “superior” to those that find more favour in the cultural marketplace. Indeed, to do so can seem like the purest elitism. Yet, as Clune suggests, the claims of “equality” and “judgment” can be reconciled if we acknowledge that widening the material conditions that provide access to “superior forms of life” must be a central goal of progressive politics.
In my book The Market Logics of Contemporary Fiction, these competing pressures and concerns form the starting point for an investigation of how late twentieth- and early twenty-first-century writers have sought to hold open spaces for innovation and experimentation in defiance of prevailing market norms and preferences. Examining work by a wide range of authors, including Iain Sinclair, Sheila Heti, Ben Lerner, Colson Whitehead, Nell Zink, and Teju Cole, I show how the contemporary novel internalizes the competing demands of artistic autonomy and commercial success. This mode of self-consciousness – what I call “market metafiction” – reflects a situation in which the conditions conducive to a flourishing literary culture (from access to cultural education to affordable housing in major cities to mainstream presses’ publishing priorities) are narrowing, even as the dream of a genuinely democratic cultural field – in which the “avant-garde” and the “popular” are not simply antitheses – lives on.
How might this dream be realized? My book focuses on the British and American literary scenes, but in other parts of the world state provisions are in place that actively shield authors from the most acute pressures of the marketplace – such as the writers’ stipends offered in Norway and Germany. Such initiatives would have a transformative effect in the British and American contexts, but could they also be expanded and radicalized? After all, why should you have to prove that you are a “writer” to be entitled to payments that would buy you time to develop your cultural and intellectual interests and capacities, at least partially liberated from the demand to make a living? In The German Ideology, Marx hypothesizes that “in a communist society there are no painters but at most people who engage in painting among other activities.” As the critic John Guillory suggests, “what Marx represents as the disappearance of autonomous production can also be construed … as its universalization. No one is a painter because everyone is (or can be).”
For some, the idea of a guaranteed regular payment to all citizens, irrespective of any form of qualification – a Universal Basic Income (UBI) – heralds nothing less than the arrival of a “fully automated luxury communism.” Such claims may be overblown – and the establishment of such a scheme may be fraught with challenges and pitfalls – but the basic premise of putting in place conditions that would allow us to “experiment and build unconventional lives, choosing to foster our cultural, intellectual, and physical sensibilities instead of blindly working to survive,” in Nick Srnicek and Alex Williams’ words, has a profound appeal. At the very least, the concept of UBI offers an instructive thought experiment, since it points to the kinds of material transformations that would be necessary for a genuine democratization of “high culture,” as opposed to its mere dissolution in the market. In my book, I argue that a key challenge for cultural practitioners and critics today is precisely to imagine less ends-focused, more democratic structures of support for the arts – structures capable of fostering the creative and intellectual autonomy that is the condition of a literary culture truly worthy of that name.
Get 20% off this book by entering Market19 at the checkout before 30th September 2019. 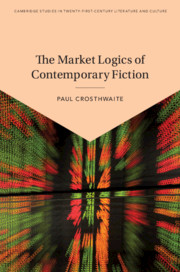 The Market Logics of Contemporary Fiction by Paul Crosthwaite

About the Author: Paul Crosthwaite

Paul Crosthwaite is a Senior Lecturer in the Department of English Literature at the University of Edinburgh....