History and Historiography on the Internet: Rewarding Truths or Fake News?

In this post, Professor Daniel Woolf, author of A Concise History of History: Global Historiography from Antiquity to the Present cuts to the core of the debates around the internet and its pros and cons as a tool for historical research, teaching and public awareness of the past. Can we limit the potential spread of misinformation whilst using this powerful tool to our advantage? 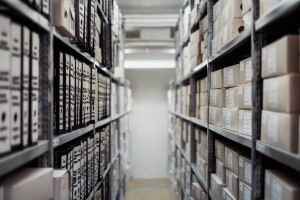 Gone are the days of primary sources and answers manually found in archives. Photo by Samuel Zeller.

Over the past 25 years, the internet has revolutionized the communication of knowledge in many fields, history included. Search engines allow on-line investigation that can save the historical researcher not merely hours, but weeks when compared with the bibliographic or archival tools available to the present writer when he was a graduate student forty years ago. Rare book collections, once only available by travel to research libraries, or on cumbersome microfilm, are now a tap or two away from one’s desktop, tablet, or even phone. As travel becomes more expensive (and has environmental implications), this is unquestionably a boon, even if something is lost in not having the experience of contact with original documents.

The internet has made communications easier, and answers quick to find without much trouble. Academics can discuss news and opinion with those of different study areas, as can academics with the wider population. One can become virtually acquainted with just about anyone; youthful researchers interacting with more senior professors that might never get a chance to meet. The dialogue often, between academics at least, remains respectful and democratic, removing hierarchy that might be found when conversing in person or during conferences.

So much for the benefits. But as with any technology, there are risks as well as rewards. ‘I saw it in the internet’ is often the bane of those in professions such as medicine and engineering. Historical falsities and outright lies can spread as easily—perhaps more easily—than facts. So can simplistic statements such as ‘history is all a matter of interpretation’ – an arguable proposition among academics of different philosophical inclinations, and one which tends to degenerate into ‘my view is just as good as your view’.

This has become more acute in the current era of ‘fake news’. Leaving aside propaganda websites filled with error, conspiracy theory, and outright hatred, there are hundreds of innocuous-looking websites and social media accounts that look authoritative enough but may well not be. How does one tell fact from myth, and a serious scholar (which does not necessarily mean an academic) from an enthusiastic hobbyist, much less a malicious charlatan?

The current atmosphere of suspicion toward ‘experts’ and rejection of intellectual rigor has regrettably turned social media sites into spaces for unpleasant exchanges, and for assertions such as ‘you academics don’t have a monopoly on the past’. The latter statement is true enough: we don’t, and we shouldn’t, especially if we are in the business of encouraging awareness of the past. However, it is also true that academically-educated historians do receive specialist training in the handling and critique of sources that others do not. These aren’t prerequisites of writing good history, but they can save the historian from error. 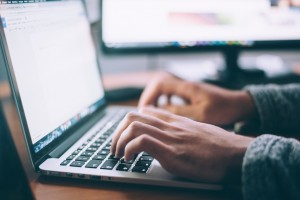 Do historians run the risk of becoming “self-appointed police” in pursuit of truth and fact circulating the internet?
Photo by Glenn Carstens-Peters

That said, academic historians are on the horns of a dilemma. Many of us are instinctively sympathetic to any activity that encourages interest in the past, not merely because it is a social good in its own right but because our careers and livelihoods depend on a sufficient interest. We must be able to populate our classes and to create sufficient good will toward study of the past to encourage politicians and legislators, and also institution administration in some cases, to continue to support history departments with adequate funding for jobs and research. So, too elitist and snobbish a response to historical error on the internet is counterproductive. We also tend, I think, to be more forgiving of error and oversimplification if it occurs on a patch of the past not our own: I react more to misstatements in historical fiction or film about my home turf, early modern England, than I would to comparable errors concerning Ming China or late republican Rome.

Perhaps it is best to see our role, with respect to internet-based history, as guides rather than self-appointed police. Nothing is to be gained by condescending non-academics, or even younger, less experienced academics, in error. That does not mean that we should ignore error without correction; we similarly have a social responsibility to ensure that misunderstandings of history, which can often have huge implications for present policy, are met with corrections from authoritative sources. It is not a binary choice between ignoring or attacking, but rather a matter of tone.

The internet is here to stay, and we’ve only just begun to realize its implications, positive and negative, for historiography. Care must be taken in its use as a research and communications tool—and that injunction applies just as much to those on the inside of the ivory tower as those outside. 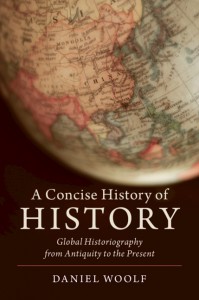 “‘A Concise History of History presents a truly global approach to the writing of history from ancient times to the present, integrating historiographical traditions from across the world into a pluralistic story. In a clear authorial voice shaped by years of teaching, Woolf examines history’s multi-vocal past and speculates about its future.’ Merry Wiesner-Hanks, University of Wisconsin, Milwaukee

‘Daniel Woolf’s A Concise History of History is lucid, balanced and accessible as well as wide-ranging in both space and time. It makes an ideal introduction to the subject for undergraduates and can be read with pleasure by anyone who wished to become aware of the variety of human approaches to the past.’ Peter Burke, University of Cambridge

A Concise History of History: Global Historiography from Antiquity to the Present, by Daniel Woolf can be purchased through the Cambridge University Press website (£22.99 / $29.99). Professors or instructors can also request inspection copies of this core textbook for their courses here.

About the Author: Daniel Woolf