When Attalus III died, Aristonicus seized the throne and called himself Eumenes III. Slow to claim their rights under Attalus’ will, the Romans moved in, years later, and―at the second try―defeated Aristonicus. They took the parts of the Attalid kingdom they liked, and ignored the rest.

In the neglected back-blocks of Asia over the following decades, this gave Antipater of Derbe his chance. He took over his home town and led the people against the Cilicians and the Pisidians. As he saw himself, no doubt he was a great man; to others, he was a scallywag. Q. Marcius Philippus, Roman governor of Asia, took Antipater’s sons as hostages. But Philippus’ attempt to get control was ineffective.

In those days at Apollonia in Pisidia, on the edge of Antipater’s realm, Artemon son of Olympichus was priest of Zeus.

The rhythm of life continued: Antipater met his end, clashing with a more powerful, more ruthless ruler: Amyntas, tetrarch of the Trocmi and (from 36 to 25 BC) king of Galatia.

At Apollonia, though, one warlord looked much the same as another.

Then came real change. In 25, Amyntas died and the Romans took over in Ankara, setting up their province of Galatia.

Artemon had grandsons. Demetrius was deputed twice by the city of Apollonia to go on diplomatic missions to the Emperor Augustus. Hopes of security rested on Rome.

The younger grandson, Apollonius, lived long enough to go (in AD 19) on a diplomatic mission to Germanicus, adopted son of the Emperor Tiberius. Called ‘lover of Augustus and lover of his fatherland’ on his gravestone, Apollonius set up three statues in the sacred enclosure of the Augustus family. Like his grandfather, he was a priest―but not of Zeus. Apollonius (and his brother Demetrius) were priests of the goddess Rome. It was clear where power came from.

Apollonia was a small city, one where power and wealth were held from generation to generation.

In the third century AD, a scion of this same family died and a gravestone was set up by his widow, his son and his daughter. His official name was Alexander―but his heritage shone through, and the age-old name he was really known by was Artemon.

Nothing about religion in the wording, but Artemon’s gravestone had a cross carved in the pediment.

This family in the first centuries BC and AD had looked for help to ‘a sacred cosmos … capable of maintaining itself in the ever-present face of chaos’ (as Peter L. Berger called it)―that cosmos being (to Artemon) that of Zeus and the Olympian gods, then (to Demetrius and Apollonius) that of Augustus and the imperial family, in distant Rome.

In the third century the world seemed chaotic once more. But the latter-day Artemon looked to Christianity. ‘Every human society, however legitimated, must maintain its solidarity in the face of chaos’ (Berger again, in The Sacred Canopy).

Christianizing Asia Minor traces how and why communities in Roman Asia Minor moved, through the Roman imperial period before Constantine, towards placing themselves under a Christian sacred canopy. 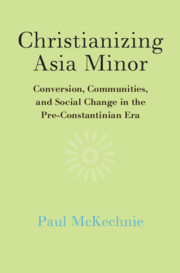 About the Author: Paul McKechnie

Paul McKechnie is an associate professor in the Department of Ancient History at Macquarie University, Sydney. He is the author of The First Christian Centuries (2001)....