The Promise of Early Franciscan Theology

For generations, early Franciscan theology has suffered either from relative neglect or from various narratives—partly responsible for its neglect—which have tended to downplay its significance. One such narrative was propounded even by the few scholars of the twentieth century who devoted time to researching the first generation of university masters in Europe and specifically Paris—which was the main, and in some respects the only, center theological study at the time. According to this narrative, members of this generation, including early Franciscans, are interesting only as forerunners for the Thomas Aquinas and perhaps the later Franciscan Duns Scotus, in whose light their achievements pale to the point of insignificance. This outlook has infected even the study of Aquinas’ Franciscan contemporary Bonaventure and the Franciscan order more generally, which have been described in the literature as inferior or immature counterparts to Aquinas and his Dominican order, respectively. Another narrative related to this one presupposes that early university scholars, above all, Franciscans, did little but endeavour to reiterate and systematize past authorities, especially the authority of authorities, who is credited with founding the Latin theological tradition: Augustine. Complicating these narratives is another which regards Duns Scotus as an innovator in the worst sense of the theological and philosophical tendencies that have given birth in modernity to rationalism or faithless reason in philosophy, on the one hand, and voluntarism or reasonless faith in religion, on the other. My motivation for writing Early Franciscan Theology was effectively to change the narrative and highlight the innovativeness and promise of the early Franciscan intellectual tradition and the tradition more generally. Part of the strategy for doing so involves disentangling early Franciscan thought from Augustinian thought with which it has long been conflated. This is much easier to do that it might first seem, for an actual look at early Franciscan texts finds their authors engaging with many sources other than Augustine in articulating their most significant positions, and yet doing so in a way that is clearly related to their own larger vision and frame of reference. These are certainly no slavish followers of authorities. There are certainly many cases where Augustine is used, but this was not uncommon for scholastics, and the key question is how he was used. More often than not, we find quotations deployed in a dialectical fashion to explore a variety of positions, not necessarily Augustine’s, and ultimately to support a position that is altogether of the Franciscans’ own making. This was characteristic of the scholastic period in which the accepted method of thinking creatively and innovatively was to do so in conversation with historical sources. By attending to the idiosyncratic uses and indeed ‘stretching’ of sources, we can discern relatively easily, although not without effort, the novelty of the views they espoused and the religious context in which they intended to espouse them. This revolutionizes our perspective of the scholastic scene, because it shows that, far from mere placeholders for Aquinas, early Franciscans and their colleagues defined the terms of the debates with which he would engage in many cases. They established many of the questions, and the method and literary genres for answering those questions, which would dominate for centuries to come. Far from mere rehearsals of Augustine, the answers that early Franciscans developed laid the foundation for and anticipated those of later Franciscans, questioning the narrative that the latter break from the former. When both strands of the tradition are interpreted in their proper religious and intellectual context, moreover, their insights can be distinguished from modern trends and conceived in terms of their own theological integrity and import. The promise and relevance of Franciscan thought can be discerned, and to facilitate this is what my project is all about. 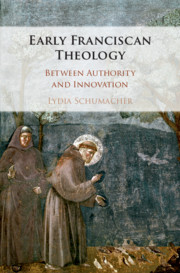 About the Author: Lydia Schumacher

Lydia Schumacher is Reader in Historical and Philosophical Theology at King's College London. She is the author of Divine Illumination (2011), Rationality as Virtue (2015), and Theological Philosophy (2015), and co-editor of The Oxford Guide to the Historical Reception of Augustine (2013)....