The Nile’s Journey Through Time

When Herodotus visited Egypt in the fifth millennium BC, he noted how Egypt was the gift of the Nile, since the fertile black muds that arrived with the annual flood were the foundation of Egyptian agriculture. Beyond its annual flood, the Nile river has often been regarded as stable and eternal over the longer term; a green thread through the Sahara Desert that supported life through the age of the pharaohs and beyond.

However, Herodotus, in his time heard tales from priests and historians of great changes over the preceding thousand years. We too, in the light of recent investigations, find that the Nile is in constant motion. Beyond the annual flood cycle, it writhes across the Nile valley, at times consuming the towns that lie upon its banks and at others abandoning them without fresh water or transport. Moreover, on a longer timescale of ten thousand years, the valley has changed from a hostile, swampy environment with menacing crocodile and hippopotami to the Nile we know today.

Populations living in and around the Nile valley adapted to this changing Nile and, as climate has changed, moved between the valley and the surrounding Saharan area. Although Sahara is now a bye-word for aridity, there were times, as little as eight thousand years ago, when the region was dotted with lakes, forests and grasslands. This lush habitat was desiccated as climate changed to that of our own times.

The dune sand, liberated as the Sahara dried out, also changed the topography of the valley and eventually lead to the development of the delta. Humans, driven out the desert areas were quick to populate and exploit these new habitats. As Egyptian society settled down to live at close quarters with the Nile, they started to devise ways of responding to its changeability. At first, they monitored it and interceded with the gods for a good flood and the prevention of drought and famine.

With time, a greater understanding of the Nile lead to an ambition to direct and manage it. Re-direction of a minor channel of the Nile eventually became re-direction of the whole Nile River so that the major transport and irrigation artery of the country produced the best possible conditions for the inhabitants of its towns, farms and fisheries.

The rich archaeological heritage of Egypt, when combined with the geological sedimentary record, reveals complex interactions between the people and their river. The unification of Egypt and the development of a state apparatus was strongly dependent upon the ability of the pharaoh to manage the river and generate taxes from its agricultural plain.

From documents, inscriptions and architecture we find hints of the reactions and attitudes of the people of the past to their changing landscape. Exploring this dialogue between the people and their environment, ‘The Nile and Ancient Egypt’ weaves together evidence from sites in the Nile valley and its desert hinterland to create a picture of constantly changing habitat and human resilience. 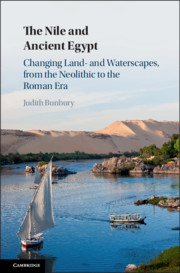 The Nile and Ancient Egypt By Judith Bunbury

About the Author: Judith Bunbury

Judith Bunbury is Senior Tutor at St Edmund's College, Teaching Associate in the Department of Earth Sciences, and member of the MacDonald Research Institute at the University of Cambridge. She has worked on several major sites in Egypt, including the Temples at Karnak and the Giza Pyramids....