In support of Pride Month chapter authors and editor of The Cambridge Handbook of the Psychology of Prejudice discuss the [lack of] presence of LGBT+ characters in film, television and games.

The 1999 film Boys don’t cry tells the heartbreaking true story of Brandon Teena, a young transgender man from the American Midwest who was brutally raped and murdered for having the courage to express his gender identity.

Hilary Swank won an Academy Award the following year for her portrayal of Teena. Aside from the fact that Swank is herself cis-gendered (whereby her gender identity and sex assigned at birth correspond; we’ll get to this later), this was undoubtedly a step in the right direction for LGBT+ representation and visibility.

For many decades, LGBT+ kids for the most part did not see people like them represented on their screens. What representations did exist were generally not positive, or involved gross misrepresentations. They held the promise of a dark future for LGBT+ youth, of fear, ridicule, stigma and isolation. While Swank’s portrayal certainly falls within the dark category, it was an honest, compassionate account at a time when trans characters were used for comic effect, represented as twisted souls living on the fringes of society, or ignored altogether.

LGBT+ people make up a sizeable proportion of our population, but today still only represent a minuscule proportion of speaking characters in top films (see below for rates of speaking characters in popular films from 2014-2017). In this blog entry we make the case that increased representation will help LGBT+ people feel seen and included, reduce anti-LGBT+ prejudice, and lead to a richer, more interesting world of stories. 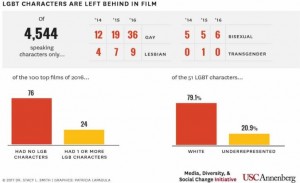 Graphic from the Annenberg Inclusion Initiative

LGBT (under)representation: This graphic displays the number of LGBT speaking roles from the 100 top-grossing movies annually from 2014-2017. Note, out of these 400 popular films, only one transgender character has appeared. USC Annenberg Inclusion Initiative.

Specifically, we need to see LGBT+ visibility in the form of complex characters that exist beyond the purpose of flagging minority representation, or whose struggles and successes revolve solely around the reality of being LGBT+. We just need to see them as people, struggling through the ups and downs of living like we do with any run-of-the-mill straight, cis-gendered protagonist. Absolutely, the experience of struggle and discrimination is important to share, but it can’t be all there is to these characters and their stories.

Actor Ncuti Gatwa, who plays the a Gay teen, Eric, on the popular Netflix show Sex Education talked about just this issue in a recent interview with Vulture. He said:

“There is always a danger of making [my character Eric] a stock character because he’s black and Otis is his best friend. He’s also gay and Otis is his best friend. Those are two avenues whereby you could just make him comic relief. But he’s so much more than that. We see him struggle with his religion, parents, and heritage and, obviously, his sexuality, and accepting all those things about himself.”

Gatwa’s quote also raises an important point about how sexual orientation and ethnic identity can interact to determine how one is perceived, and how one experiences the world. We also need to see greater intersectional LGBT+ visibility on our screens. LGBT+ youth are not just White. They are Black. They are Asian. They are Latinx. They represent more diversity than what our screens currently display to us.

In 2019, LGBT+ youth are still taking their own lives at an unacceptable rate. There is evidence that this is in large part due to the stigma they face, living in a world in which some consider them abnormal, alien, and deviant. Positive representations and visibility help to normalize the diversity that already exists in our communities. This can not only positively impact the lives of LGBT+ youth, but the social fabric of society at large.

On the one hand, greater LGBT+ representation means crucial visibility for young LGBT+ people. It means more narratives, characters, and role models for these young LGBT+ people to identify with. It signals to young LGBT+ people that their lived experiences matter and that their stories are valued. In doing so, it may help ameliorate the stigma felt by LGBT+ youth, positively affecting their psychological wellbeing. It could go a long way in reassuring these kids that happy fulfilling lives are possible.

On the other hand, greater representation may also help non-LGBT+ people to connect with LGBT+ stories. Media portrayals may have been in part responsible for positive shift in attitudes towards LGBT+ in recent decades, and the advancement of gay rights.

Research in the area of parasocial contact shows that being exposed to LGBT+ stories gives non-members the chance to be exposed to the diverse, complex, and ultimately human experiences of these groups. In general, there is sound evidence that being exposed to the narratives – the stories – of people different from ourselves make us more accepting, kind, and non-prejudiced. One fantastic example comes from the wizarding world of Harry Potter, with research finding that the compassionate representation of marginalised groups in the novels was subsequently associated with reduced prejudice toward actual minorities in the non-wizarding world.

Seeing LGBT+ characters on our screens can lower prejudice towards members of the LGBT+ community in people who would otherwise not have had the opportunity for contact with an LGBT+ person. These exact same arguments can be made for having increased representation of LGBT+ actors on our screens (rather than uniformly having cis-gendered, heterosexual actors play LGBT+ characters, and celebrating them for it). Thus, greater LGBT+ representation can directly reduce the societal stigma attached to the LGBT+ community, and the discrimination associated with it.

We have to do better

As consumers of film, television, books and games, we all have a say in what appears on our screens. When LGBT+ representation is done right, we should seek out, consume, and support these stories.

The recent backlash to films starring women (think Wonder Woman, Ghost Busters), TV shows having characters come out (this didn’t end with Ellen, there was public outcry when beloved children’s cartoon Arthur featured same-sex couples, both in 2005, and again this year!), and TV true stories about trans people (young transgender woman Jazz Jennings faced backlash for telling her story on her TV show I Am Jazz) clearly demonstrates that we have a long way to go in terms of accepting equality on our screens.

However, there is reason to be optimistic as LGBT+ stories are beginning to cut through to mainstream audiences. Recently we have seen truly wonderful performances by LGBT+ actors in standout roles; Jamie Clayton as Nomi in Sense 8, Lena Waithe as Denise in Master of None, Trace Lysette as Shea in Transparent, Laverne Cox as Sophia in Orange is the New Black, Josh Thomas as Josh in Please Like Me… to name just a few (we could go on and on).

Roles like these should continue to be filled by actual LGBT+ actors, and wherever possible we should see LGBT+ people also appearing in non-LGBT+ roles. It all comes back to seeing LGBT+ folk as people, every bit as relevant, valued, talented, funny, heroic, flawed, weird, and exquisitely human as everyone else. 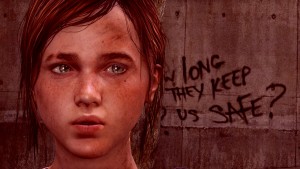 Ellie in The Last of Us 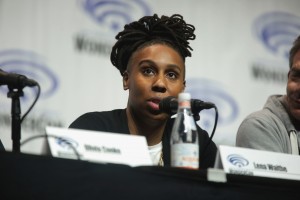 Lena Waithe as Denise in Master of None 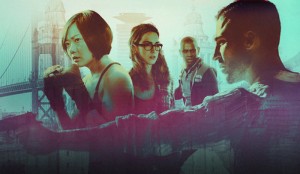 Jamie Clayton as Nomi in Sense 8 (2nd from left) 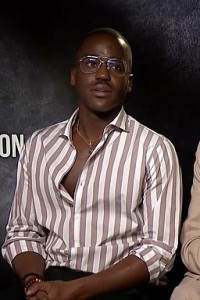 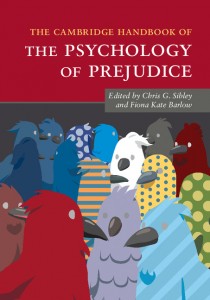 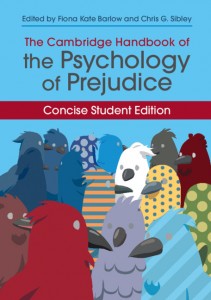 About the Author: Michael Thai

Dr Michael Thai is a social psychologist specializing in the study of intergroup relations, prejudice, and sex. He is currently a lecturer at the School of Psychology, The University of Queensland....

About the Author: Charlie Crimston

Dr Charlie Rose Crimston is a moral psychologist who specializes in the study of moral based change, decision-making and identity. Charlie is currently a Postdoctoral Research Fellow within the School of Psychology at the University of Queensland. She is also a proud transgender woman. ...

About the Author: Fiona Barlow

Dr. Fiona Kate Barlow is the co-editor of The Cambridge Handbook of the Psychology of Prejudice with Chris G. Sibley of the University of Auckland. She is a social psychologist specialising in the study of race relations. From 2012 to 2014 she held an Australian Research Council early career fellowship, and in 2016 accepted an Australian Research C...