The Holocaust and New World Slavery

It is almost inevitable that conversations regarding the Holocaust will generate questions of comparison to other historical instances of mass death. And, conversely, it is almost unavoidable when discussing instances of mass death to to ask how event X or Y compares to the Holocaust.  This circumstance has, in fact, been evidenced in the continually growing literature on events like the Gulag, the Ukrainian Holodomor (famine) of the 1930s, the massacre of Armenians during World War I by the Turkish regime and, more recently, Rwanda in the 1990s.  In all of these, and many other cases, the comparison of these events to the murder of European Jewry by the Hitler state has become a standard feature of the relevant scholarly (and more general) discussion.

Not surprisingly, this sort of comparison has also become a fixture in the analysis of the two great crimes linked to European colonial settlement of the New World: (1) the treatment of the indigenous peoples; and (2) the creation of the enterprise of New World slavery.  The 500th anniversary of Columbus’s arrival in Hispaniola was the occasion for the publication of much new literature and a wide variety of reappraisals as to what this event meant vis-à-vis the native peoples.  And this discussion has continued since 1992.  Likewise, slavery, as a central feature of the New World, and especially American society both before and after 1776, has been a subject of continual debate among historians.  Indeed, the literature on New World and American slavery is extraordinarily large and much of it is of very high scholarly quality.

However, the comparison of these two phenomena to the Holocaust, while much commented on, has been neither sufficiently informed nor methodologically sound.  The much utilized and influential work of David E. Stannard (American Holocaust) is the best proof of this.  In spite of its influence that centers around the claim that what happened in early Spanish America to Native Americans and African slaves was comparable to the Holocaust and a case of genocide, its analysis is deficient in many ways and its method is altogether dubious, as my about to be published 2-volume study (The Holocaust and New World Slavery) shows very clearly.

In this new study I have tried to fill this serious gap in the existing scholarship relative to New World Slavery.  That is, I have made a serious effort to understand and compare American black slavery and the Holocaust in a non-polemical, academically serious and intellectually legitimate way.  (A future work will deal with the history of the Native Peoples in Spanish America.)  Regarding the matter of the comparison if the Holocaust and slavery there is much to say, both as regards issues of method and issues of substance.  But as this posting is only meant to introduce my work, I will only here observe that my research has led me, in particular, to appreciate that many of the most important and illuminating topics relevant to this comparison are related to the issues of women and children in the two historical contexts.  As a result, topoi relating to women (and children) – reproduction, sexuality, abortion, miscegenation, and the treatment of children – have received special attention.  I have also made a special effort to note aspects of the world of slavery that have no counterpart in the world of the Holocaust in the belief that this sort of analysis throws a distinctive light on the comparison being made.  These subjects include: manumission, the primacy of labor, inter-racial sexual relations, and the nature of slave law in the United States.  Close scrutiny of these matters points us towards an appreciation of the telling – even defining – differences between the system of bondage in the Americas and genocidal program of the Third Reich.

Steven T. Katz holds the Slater Chair in Jewish and Holocaust Studies at Boston University.  He can be reached at [email protected] 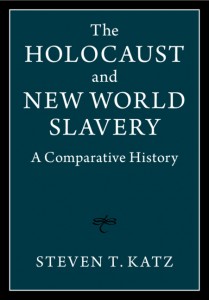 The Holocaust and New World Slavery by Steven T. Katz

About the Author: Steven T. Katz