Nuclear Weapons: Still a Threat to Public Health, and Growing

Nuclear Weapons: Still a Threat to Public Health, and Growing

Lead editor and an author of 'Preventing War and Promoting Peace', William H. Wiist, outlines his argument on why nuclear weapons are a growing threat to public health and suggests roles for health professionals in advocating reduction of nuclear weapons.

Many health professionals understand that there are myriad and horrific immediate health consequences of the blast and thermal effects of nuclear bombs as well as predicted long-term effects such as “nuclear winter” (Erwin, et. al, 1962; Solomon and Marston, 1986; Robock 2010). Because a nuclear attack anywhere in the world would overwhelm the health infrastructure and make effective humanitarian responses impossible (http://www.icanw.org/wp-content/uploads/2012/08/catastrophicharm2012.pdf) the only reasonable action for health professionals is to try to prevent nuclear weapons from ever being used.

There are about 15,300 nuclear warheads in the world, most held by the U.S. and Russia with the remainder by China, Great Britain, France, India, Pakistan, North Korea and Israel. The U.S. has about 4,000 nuclear weapons—strategic and non-strategic, deployed and non-deployed in its stockpile (https://www.brookings.edu/research/50-facts-about-u-s-nuclear-weapons-today/). Many of the existing nuclear weapons are 10 or more times stronger than the bombs dropped on Nagasaki and Hiroshima Japan during WW II. According to Ellsberg (2017), the U.S. and Russia have the capability of a nuclear “first Strike,” a full-scale attempt to disarm a nuclear armed opponent’s military forces as fully as possible, either based on radar or satellite warning or a threat from the opponent, that would  obliterate billions of humans and cause total environmental disruption. Contrary to common belief, the U.S. President is not alone in holding the authority to use nuclear weapons because that authority was historically tacitly delegated down the chain of command to Generals and bomber pilots (Ellsberg 2017).

There are several ways that the threat to public health from nuclear weapons has been exacerbated since the end of the “Cold War” and because of those the Bulletin of Atomic Scientist recently moved their world threat clock to two minutes until doomsday. Increased threats include increasing diplomatic challenges between the U.S. and China, Russia, North Korea, and Iran, and conflict in the Middle East; tension between the India and Pakistan; verbal threats by world leaders that seemingly express the willingness to use nuclear weapons; U.S. withdrawal from weapons treaties, and the U.S. enhancement of nuclear weapons.

The U.S. has plans for a $1.2 (now, $1.7 trillion due to inflation) 30-year program of “modernization” and enhancement of the U.S. nuclear weapons capability (https://www.psr.org/wp-content/uploads/2018/05/us-nuclear-buildup.pdf ) that substantiates the perspective that the U.S. is committed to maintaining its nuclear arsenal indefinitely, with the implied threat, and encourages other countries to similarly invest.  In 2018 U.S. President Donald T rump announced that the U.S. would withdraw from the Intermediate-Range Nuclear Forces Treaty that forbids the U.S. and Russia from fielding intermediate-range nuclear Weapons.  Among other nuclear enhancements, the Trump administration’s 2018 Nuclear Posture Review includes plans for acquisition of low-yield weapons for use in combat against opponents troops and command centers (https://www.thenation.com/article/us-nuclear-arsenal-triad/) whose use could be misinterpreted by an opponent who might then in retaliation “launch on warning” strategic nuclear weapons against U.S. homeland targets, thereby causing an all-out nuclear war.

In addition, there have been instances in which U.S. early warning systems failed; U.S. missiles carrying nuclear weapons have almost been “accidentally” launched; bombs have been “accidentally” released by U.S. bombers over the U.S. (without detonating); other bombs were lost and never recovered (https://www.brookings.edu/research/50-facts-about-u-s-nuclear-weapons-today/); and nuclear bombs transported on military airplanes became unknowingly unaccounted for a time.

Prior work of health professionals serve as guidance and inspiration to current health professionals in advocating for the abolition of nuclear weapons.  Through the years the American Public Health Association has taken several anti-nuclear weapons policy positions.  The International Physicians for the Prevention of Nuclear War was awarded the Nobel Peace Prize for its anti-nuclear weapons work. In 2017 the coalition of organizations (including health organizations), the International Campaign to Abolish Nuclear Weapons, was awarded the Nobel Peace Prize for its work to bring about the 2017 U.N. Treaty on the Prohibition of Nuclear Weapons (https://www.wilpf.org/portfolio-items/the-nuclear-weapon-ban-treaty-resource-guide/ ).

1 William H. Wiist holds a Courtesy Faculty appointment in the School of Biological and Population Health Sciences at Oregon State University. Prior to formal retirement he was a Professor of Health Science and a Senior Scientist in the Interdisciplinary Health Policy Institute at Northern Arizona University, where his policy work focused on the influence of corporations on health, policy and democracy.

Reviews and endorsements for Preventing War and Promoting Peace

“This is a book that needs to be read, particularly, now that the sounds of war are appearing again in the chambers of power. It’s important to inform the public about the dangers of war and health professionals have a major responsibility in this task.” – Vicente Navarro, The John Hopkins Bloomberg School of Public Health, Chief Editor of the International Journal of Health Services

“This pathbreaking book provides an enlightening and inspiring analysis of the connections among war, empire, and health. Especially during this historical period of what has been called ‘permanent war’, as resistance to war as a tool of the failing capitalist economic system is growing around the world, the contributions in this book become essential reading in understanding our current situation and struggling to change it.” – Howard Waitzkin, Distinguished Professor Emeritus, University of New Mexico, and Director, Civilian Medical Resources Network.

Find out more about: Preventing War and Promoting Peace: A Guide for Health Professionals – Now available in Paperback! 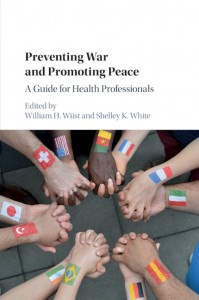 About the Author: William H. Wiist

William H. Wiist holds a Courtesy Faculty appointment in Global Health at the College of Public Health and Human Sciences at Oregon State University. He previously served as Professor of Health Sciences and Senior Scientist in the Interdisciplinary Health Policy Institute at Northern Arizona University. He has been published in numerous journals, a...