I decided to write a book about male sexuality because I felt this was a neglected topic. The bookshop shelves marked ‘Gender Studies’ are largely filled with books about feminism. Fair enough! Women have been written out of history for too long.  When Germaine Greer and her fellow feminists began to redress the balance in the 1960s and 1970s, such a movement was long overdue. But, since that time, the feminist literature has multiplied while men and their gender and sexual preoccupations are in danger of losing the visibility due to them.  Men and Sex: A Sexual Script Approach is my attempt to put male sexuality back on the map with an authoritative academic account of the subject.

Researching for the chapter on gay men brought home to me just how many myths there are on this topic. Most people seem to think men choose to be gay. They don’t; it’s something they realise about themselves usually around the age of nine or ten, sometimes a bit earlier, sometimes much later. Boys become aware of their sexual attraction to the same or the opposite sex at what is now called ‘adrenarche’, a time when sex hormones begin to kick in but three or four years or so before these hormones arrive in full force at ‘gonadarche’. (One of my collection of short stories The Ages of Desire features a married man with a grown-up daughter who has always known he was gay but only admits it to himself in his sixties. That is not an uncommon scenario).

Why are some men attracted to others of the same sex when others aren’t? Again, there are ideas around that ‘it’s all genetic’ and other ideas that it’s all down to the way mothers bring up their boys. Now, there is some good evidence that genes are of some importance in some men. Studies of twins confirm this1. But genes do not provide anything like a full explanation. In particular, although this was claimed some years ago, there is no such thing as a gay gene. All the same, it does seem likely that biological or physical influences do play a part. What might they be? The most convincing evidence is around the possibility that when male foetuses are exposed in the womb during pregnancy to antibodies produced during earlier pregnancies that have produced boys, there is more likely to be a gay outcome2.

Another myth is that the sex life of gay and straight couples is quite different. A 2013 study by Wall, Stephenson and Sullivan suggests that gay couples have sex at about the same frequency as straight couples who have been together about the same amount of time and their level of sexual satisfaction is similar3. However, according to Peplau and Fingerhut, attitudes to sexual fidelity are often more relaxed among gay couples4.

Sadly, it is not a myth that gay men are especially likely to develop mental health problems. This is well explained by the stigmatization of gay men experience, not as great in Britain and the United States as it used to be, and nowhere near as great as it still is in some low- and middle-income countries such as Uganda and Russia.  But it’s there all the same. Fortunately, effective help is much more easily obtained than it used to be with Stonewall in the UK a useful source of advice5.

To celebrate Pride Cambridge University Press have curated a free collection of work across the Humanities, Social Sciences and Psychology. This free collection of journal articles and book chapters is available to view entirely for free on Cambridge Core throughout June 2019. 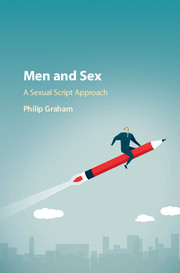 Men and Sex by Philip Graham

About the Author: Philip Graham

Philip Graham is Emeritus Professor of Child Psychiatry at the Institute of Child Health, University College London. He has published over 150 articles and several books on a wide range of subjects, including the social construction of adolescence....